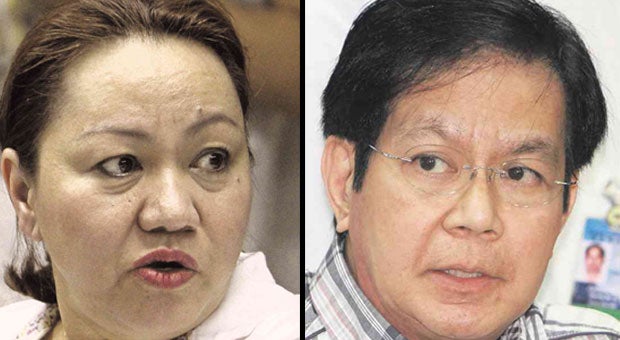 More than a hundred government officials from the present and previous administrations have been implicated by so-called pork barrel scam queen Janet Lim-Napoles in a draft affidavit one-fourth ream-thick that her family provided rehabilitation czar and former Sen. Panfilo Lacson last month.

The names—listed down on two pieces of paper with two rows each—included at least 12 current and previous senators, many congressmen and even Cabinet-level officials, Lacson told reporters on Wednesday.

“Sa Senate, may quorum so to speak, at least 12 senators. Sa House (of Representatives) mahaba ’yung listahan. There were names you would expect to be there. Mayroong mga pangalan na nandoon na maingay, mayroong hindi masyadong maingay, mayroong tahimik—basta, halo-halo doon. May nakaka-sorpresa, may mga na-expect ko na talagang dapat nandoon kahit hindi pa nabanggit sa media at hearings sa Senado at House, based on my own information,” Lacson divulged on the sidelines of the Financial Executives of the Philippines (Finex) general membership meeting.

The participation of the names implicated by Napoles was not necessarily in the form of receipt of kickbacks and commissions but in the transactions that made up the entire scam.

The former senator, who never touched the Priority Development Assistance Fund (PDAF) allocated to his office during his stint, however, refused to name the personalities, which also included executive officials from the Aquino as well as previous administrations. A number of the government officials’ staff members were also on the list, he said.

Lacson related that a former employee who was a friend of Napoles’ husband Jimmy approached him last month, saying that the pork barrel scam mastermind will “tell all, sasabihin lahat-lahat ng nalalaman niya.”

The rehab czar was approached by the Napoles family because Janet told her husband that “tiyak naming wala kayong pork barrel at hindi kayo sangkot diyan,” he related.

A meeting with Jimmy and two of the Napoles children with Lacson in his office ensued by March 24 or 25, Lacson said, after which the family left with him a folder containing a draft, unsigned affidavit of Janet.

He said the document contained a narration of events from the year 2000 that traced how Napoles “grew” her business.

Lacson, however, said the draft affidavit had “gaps,” hence was short of a tell-all. “Mayroon din akong information from other sources na wala doon,” he said.

The draft affidavit left with Lacson detailed commissions of 40-50 percent, in pesos and up to the smallest centavos, including the special allotment release order (Saro) numbers, the date of the transactions, how the transactions were made, who were paid commissions and who were their agents, according to Lacson.

With Janet soon to undergo biopsy for a potential uterus cancer on top of “real threats” posed to her life, Lacson said he asked the Napoles family to also provide him other documents that would back up the claims and serve as cross reference.

Jimmy then worked on setting a date when Lacson and Janet could speak, until news broke out that the pork barrel scam queen had already contacted Justice Secretary Leila de Lima.

When asked if it happens that some of the names implicated by Napoles will not be investigated, Lacson said he will personally testify about what he knows.

He said the Department of Justice should not relent in its pursuit of making everyone involved in the pork barrel scam accountable. “Dapat kapag corruption ang issue, walang hinay-hinay; dapat todo-bigay,” Lacson said.