De Lima said during her meeting with Napoles at the Ospital ng Makati, the businesswoman “spilled the beans on the three senators.”

According to De Lima, Napoles told everything she knew about the corruption scandal, confirmed the involvement of Enrile, Estrada and Revilla, executed a sworn statement, and expressed her desire to become a state witness.

Echoing her position in the case, even before the meeting with Napoles, De Lima said they always had a strong case on the PDAF scam and against the three senators.

“We have always maintained that we have a strong case,” de Lima said. “The objective here is truth seeking.”

De Lima revealed this during a media briefing on Napoles’ statements in her affidavit.

The DOJ chief said these would be evaluated and looked into if the businesswoman, who is the principal in the scam, could stand as witness.

“She desires to be a state witness and we would look into what could be done,” De Lima said.

She said that the DOJ, together with the National Bureau of Investigation, would investigate whether Napoles could become a state witness.

“We have not totally closed our doors on the possibility,” said De Lima who stressed that, as of the moment, there was no commitment to make Napoles a state witness during their meeting at the Ospital ng Makati.

“If the findings of the DOJ and the NBI proved plausible, then we will hand it over to the Office of the Ombudsman.”

De Lima added that even if they got Napoles’ statements, they would still counter-check it with other statements from the witnesses such as Benhur Luy.

“We cannot take her word hook, line, and sinker.”

De Lima recounted that Napoles cried during their meeting at the hospital. 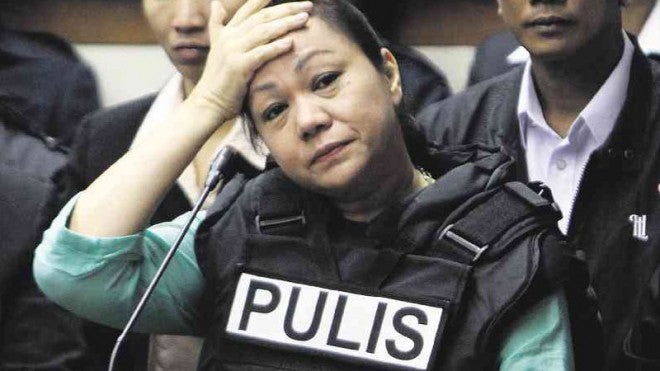 “She was tearful when she first saw me. When I entered her room, she was praying the rosary. There were pictures of Mama Mary and Jesus Christ.”

The meeting lasted for five hours—from 10 p.m. to 3 a.m.— because Napoles, fearing for her life, gave what De Lima described as a “tell-all” account of her role in the alleged P10-billion pork barrel scam.

The justice secretary said Napoles showed her “some documents” and told her that there were more incriminating papers that she could produce on the case that marks the first time senators have been indicted for plunder. The three senators have denied any wrongdoing.

Napoles was represented by her lawyer during the hospital meeting. De Lima was accompanied by her staff from the Department of Justice and the National Bureau of Investigation. Napoles’ narrative was taken down, and at the end of the meeting she signed the statement.

De Lima said there were no preconditions for the meeting, an offshoot of negotiations that began two weeks ago with Napoles’ lawyer. She said she told the lawyer that the meeting “should be tell-all, that she should be truthful, should tell the truth, no more no less.”

“There was no commitment that she will be made a state witness. My only commitment was that if her statement is already here, we will evaluate, study it and validate it very seriously and exhaustively so that we can determine what is the next step to take, to determine if she can be a state witness, of which she expressed the desire to be one,” she said.

She said it was up to the Ombudsman to determine if Napoles was needed as a state witness in the plunder case, a nonbailable offense punishable by life imprisonment.  The meeting was postponed twice. After securing approval from President Aquino, De Lima said she went to see Napoles at the tightly secured hospital.

“There will be further sessions with her for follow up, additional and clarificatory questions because there are simply too many details,” she said at the news conference after she briefed Mr. Aquino of the meeting with Napoles.

According to De Lima, Napoles was worried about her security and revealed that she and her family had been getting death threats. The justice secretary said she convinced Napoles to make a statement, which she signed.

“At first, she was just telling her story very candidly and continuously. But I told her it would be useless if she’ll only be talking to me and I won’t have any document to hold on to and would not be able to preserve those facts that she was telling me if she won’t execute a statement, so she agreed to do so,” De Lima recounted.

“As to whether or not it’s really a tell-all, or more importantly, whether or not what she would be telling is the whole truth, that remains to be seen. That is exactly part of our evaluation or assessment,” she said.

De Lima said one of her requirements to Napoles was that she give the names of those who were involved in the pork barrel scam, “irrespective of political color.” She said there would be “no sanitizing.”

Security was the “foremost” reason behind Napoles’ decision to open up on the alleged diversion of  the  congressional Priority Development Assistance Fund (PDAF) to kickbacks and ghost projects of nongovernment organizations (NGOs) purportedly controlled by the businesswoman.

De Lima added that Napoles wanted to speak to her because something could happen to her during the surgery, scheduled later Tuesday night.

“She realized that the more she remains silent and does not say anything, the more she is at risk. And in fact, she recounted instances of alleged security threats made through text, calls, to her family, etc. She realizes that now—that the more she’ll keep silent, the more she’ll be an open target. She becomes safer, so to speak, if the statement is here. And now that the statement is here, let it be a notice to those who are minded to do her harm because of what she knows: You no longer have the motivation to silence her,” De Lima said.

The justice secretary said one reason the government was exerting efforts to secure Napoles at the Philippine National Police antiterrorist camp at Sta. Rosa, Laguna, was the “expectation that she will talk one of these days.”

She said she never believed Napoles’ denials during her testimony before the Senate blue ribbon committee last November that she had nothing to do with the diversion to kickbacks of PDAF allocations designed to ease rural poverty.

When asked if there were “surprises” during Napoles’ account of the scam, De Lima replied, “There were really lot of details,” including who directly received kickbacks from Napoles herself.

She said Napoles also spoke about the alleged P900-million scam involving the diversion of the government share in the operation of gas wells in Malampaya, off Palawan, to ghost projects. The case allegedly involved former President Gloria Macapagal-Arroyo, who was named in a letter of complaint for plunder against several dozen people sent to the Ombudsman in October. The fund secured by the Department of Agrarian Reform was for victims of back-to-back storms in 2009.

Napoles went into hiding after a Makati court issued a warrant for her arrest last August, but after two weeks and fearing for her life she surrendered to President Aquino, who escorted her to the PNP headquarters at Camp Crame. She is detained for alleged serious illegal detention of her former employee, Benhur Luy, who has turned against her.

However, becoming a state witness was not on Napoles’ agenda when she sought a meeting with De Lima, according to Bruce Rivera, the businesswoman’s lawyer. “Maybe she was just afraid of her sickness,” said Rivera. “Probably she just wanted to talk to her.”

Napoles was scheduled to undergo a surgical operation for the removal of the cyst in her uterus late Tuesday night, for which she had been on a hospital furlough the past three weeks for a procedure critics said required only four days. Rivera said that while Napoles was having second thoughts on having the surgery, her doctors insisted it should be done as soon as possible.

“Time is of the essence so they said it has to be done today,” Rivera told the Inquirer in an interview at Ospital ng Makati. With reports from Christian V. Esguerra and Niña P. Calleja

Lawyer: Napoles ‘will tell all’

No commitment from DOJ to make Napoles state witness