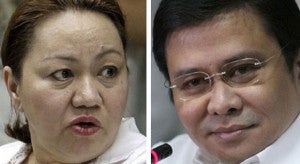 MANILA, Philippines –  Senator  Jose “Jinggoy” Estrada  smelled “something fishy” with the  Department of Justice’s  (DOJ)  alleged  inconsistent  statements on  whether or  not to get detained  Janet Lim-Napoles as state witness on the pork barrel scam.

Estrada noted the DOJ’s previous statement that Napoles was not eligible to become a state witness and the recent report that it is now considering to get her as state witness on the pork scam.

“There is something fishy,” the senator told reporters in an interview on Tuesday.

Estrada was nevertheless unfazed even if Napoles turns state witness so long as Justice Secretary Leila de Lima would not try to influence her just to pin him down and two of his colleagues, Senators Juan Ponce-Enrile and Ramon “Bong” Revilla Jr.

The three senators are among those facing plunder and graft charges along with other personalities in connection with the “pork” scam.

Estrada then disclosed an alleged desperate attempt to  pin the three of them as “the whipping boys.”

(I am concerned if the DOJ or the NBI will insist on mentioning our names. That’s my only concern).

Despite this, Estrada vowed to fight it out, insisting his innocence on the charges being hurled at him.

Lawyer: Napoles ‘will tell all’