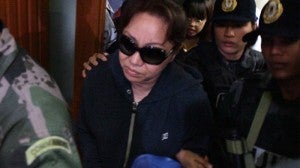 MANILA, Philippines—Janet Lim-Napoles, the alleged brains behind the pork barrel scam, may likely stay for at least one more week at Ospital ng Makati after a successful two-hour surgery performed on her on Wednesday.

Seven doctors from St. Luke’s Medical Center and three from Ospital ng Makati performed the surgery on Napoles at the local government hospital in Barangay Pembo in Makati City. Her uterus and two ovaries were removed.

“As of the moment, she is now in the recovery room, awake, coherent and with stable vital signs. So, we are happy about the outcome,” Dr. Efren Domingo, one of the doctors tapped to perform the surgery, told reporters at a briefing on Wednesday.

The doctors said the procedures cured her of “severe adenomyosis with multiple adenomyomata” (the condition of her uterus before the surgery).

Domingo said the surgery was done based on the results of the biopsy which showed that while the tumor in Napoles’ uterus was not cancerous, it was in transition from benign to malignant.

He noted that a patient with a similar case would usually stay at the hospital for recovery within one week in the absence of any complications as a result of the operation.

“Then, a follow-up would be important after three weeks,” Domingo said.

The doctor, an obstetrician-gynecologist, said the team also had to consider Napoles’ medical concerns, such as her severe diabetes and her hypertension.

“These are important parameters in the recovery. We really hope that these will be controlled,” Domingo said.

Before she is transferred to a regular room, her condition will be observed in the recovery room in the next 6 to 12 hours.

Asked if there was a need to extend Napoles’ confinement at the hospital due to follow-up consultations in the coming weeks, Domingo said the team would leave it to the authorities to decide.

A medical report will be submitted to Makati Regional Court Branch 150, which handles the serious illegal detention charge that has been keeping Napoles detained since September last year.

Judge Elmo Alameda of Makati RTC Branch 150 allowed Napoles to seek treatment at Ospital ng Makati and be attended to by doctors from St. Luke’s Medical Center in Taguig City for humanitarian considerations.

Dr. Elsie Badillo-Pascua, another obstetrician-gynecologist of St Luke’s, said Napoles looked fine after the surgery, noting that the patient gave all the doctors a “thumbs up” sign.

Before the surgery, Napoles reportedly feared for her life, prompting her to spill the beans and pin down senators in the pork barrel scam. She met with Justice Secretary Leila de Lima on Monday to execute her affidavit.

Pascua said that Napoles had shown readiness and willingness to undergo surgery on Wednesday.