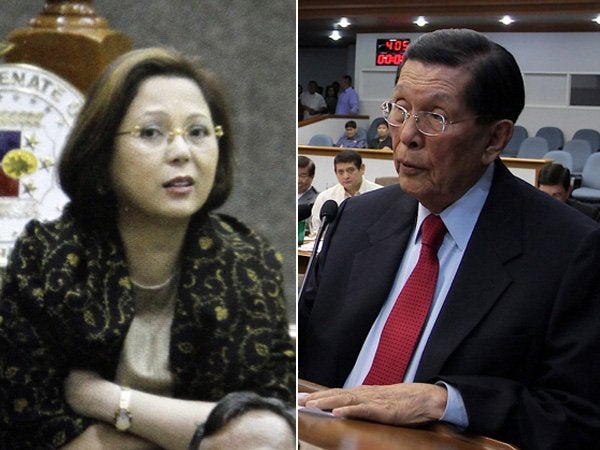 Jose Antonio Evangelista is taking the fall for his boss, Sen. Juan Ponce Enrile, and the senator’s former chief of staff, Jessica Lucila “Gigi” Reyes, who could go to jail for plunder in the P10-billion pork barrel case set to be filed by the Office of the Ombudsman in the Sandiganbayan.

Evangelista took full responsibility for processing the disbursement of Enrile’s Priority Development Assistance Fund (PDAF) as his deputy chief of staff while claiming the evidence against him was spurious.

He blamed implementing agencies for the diversion of PDAF allocations to bogus nongovernment organizations (NGOs).

Evangelista’s statement was in sync with Reyes, who told the Office of the Ombudsman that processing Enrile’s pork funds was not part of her job item.

The Ombudsman has found probable cause to charge Evangelista with graft and corruption (a bailable offense) for participating in a conspiracy to divert Enrile’s PDAF to businesswoman Janet Lim-Napoles’ fake NGOs. Enrile and Reyes were charged with plunder (a nonbailable offense) along with Senators Jinggoy Estrada and Ramon Revilla Jr., Napoles and others.

But Levito Baligod, counsel for the whistle-blowers in the pork scam, said Evangelista’s legal gambit would not hold water.

“Attorney Gigi exculpated JPE and pointed to Attorney Evangelista as the one responsible for the senator’s PDAF. The latter’s defense is ‘forgery’ of the PDAF documents.

“Clearly, Evangelista is being made the fall guy,” said Baligod in a text message.

Baligod said this legal strategy was inherently weak because the Enrile camp “failed to present the ‘authentic’ PDAF documents which they presumably have, if indeed there are. Otherwise, how were JPE’s PDAF allocations implemented? This proves their complicity and assent to the forgeries.”

He wondered why Evangelista was not surprised by the volume of documents bearing the latter’s and Reyes’ signatures presented to them for confirmation by the Commission on Audit (COA) if, in fact, no document of such nature was ever issued by Enrile’s office.

Based on his motion, Evangelista claimed that the testimonies of whistle-blowers were hearsay, inadmissible as evidence and could not be used as basis of any criminal charges.

Evangelista added that there was no evidence of his personal or deliberate participation in the scheme.

His lawyers, Ong and Mayoralgo, argued that since whistle-blower Benhur Luy admitted to the Ombudsman that he had prepared, signed and notarized the PDAF documents and liquidation reports, “it stands to reason that Evangelista precisely had no hand in the preparation and signing of the documents.”

Evangelista’s lawyers chided the Ombudsman’s “incongruous twist of reasoning” when it argued that since PDAF documents were notarized, these were presumed regular.

“But Luy himself admitted to notarizing the documents on behalf of Mark Oliveros, Edith Talaboc, Raymund Tansip and Joshua Lapuz, and one Delfin Agcaoili denied seeing the documents and submitting them as part of his notarial reports to the QC Regional Trial court,” Ong and Mayoralgo said.

Evangelista also noted that Luy’s testimony about Enrile’s participation in the scheme came only from Napoles and that Luy himself had admitted that he never handed any commission to Enrile or any of his representatives.

The lawyers blamed executives of government agencies for the diversion of Enrile’s PDAF funds.

They cited provisions in the General Appropriations Act of 2009, 2010 and 2011 that expressly mandated the implementing agencies to ensure that the NGOs they dealt with were legitimate and capable of implementing the projects.

“If there was no public bidding conducted, this should be ascribed to lapses committed by the implementing agencies and not by legislators or their staff members, including Evangelista,” Ong and Mayoralgo said.

The two lawyers noted that even COA Chair Grace Pulido Tan had told senators at a budget hearing that an implementing agency was responsible for the deployment of pork funds under COA Circular No. 2007-001.

“All that the office of a legislator may do is identify, endorse or recommend particular projects. It is absurd to hold Evangelista responsible for its (PDAF) misuse. If something went wrong in the process of implementation or if the projects were actually not implemented or in case of ghost projects, and the funds merely diverted, only the implementing agencies, together with the NGOs should be responsible. If there was any such ‘conspiracy,’ the implementing agencies and the NGOs were the parties to that conspiracy,” the lawyers said.

“The truth is no one forced the various employees of the implementing agencies to perpetrate the anomalies they committed. These employees cannot therefore cry foul when caught red-handed, and pass the blame on someone else.”

Evangelista’s lawyers claimed that the accounting records kept by Luy, Napoles’ former trusted aide, were hearsay as these had no other supporting document.

“To give credence to the so-called ‘accounting records’ and classify them as ‘evidence’ would be tantamount to believing anything creatively invented by anyone who could play around with a spreadsheet on his computer,” the lawyers said.

Evangelista said it was up to the whistle-blowers to prove that their documents were authentic.

He also found it “utterly incredulous and downright preposterous” for the Ombudsman to conclude that the signatures were signed by one and the same person “after prima facie comparison with the naked eye of the panel of investigators.”

He said spotting forgeries was not a skill that could be learned overnight.

“Surely, the panel of investigators cannot be more knowledgeable than a handwriting expert at least in the particular field of handwriting analysis,” said Evangelista who, like Reyes, tapped a retired National Bureau of Investigation handwriting expert to testify that their signatures were forged.

Just like Reyes, Evangelista also clarified his office’s previous letter to COA confirming that the PDAF documents were genuine.

In a December 2013 affidavit submitted to the Ombudsman, Evangelista said: “I thought that these documents were all regular and were the usual documents that were presented to me. So, I told the COA that I signed all those documents. This became the basis of Senator Enrile writing the COA on March 21, 2012, confirming the signatures appearing on the documents. In other words, I myself was fooled by these forgeries. I simply did not anticipate that even my signature would be forged.”

Upon double-checking signatures after news on the pork barrel scam broke out, Evangelista claimed to have discovered that his signatures in several memorandum of agreements and all of the implementing documents had been faked.

“I therefore had to send the COA another letter explaining that I erroneously verified my signatures the first time. The sheer volume of documents I had to verify was daunting, so I did not spend more than one minute examining each signature,” said Evangelista.