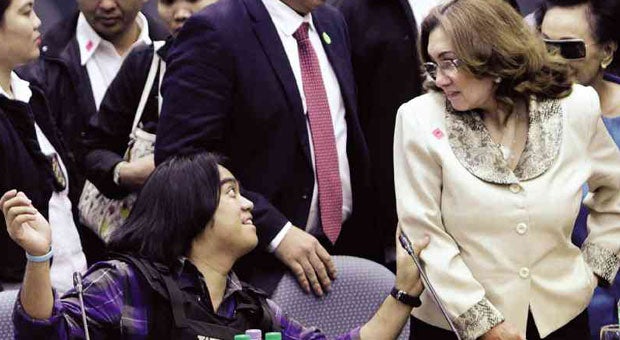 The lawyers of whistle-blower Benhur Luy and prospective state witness Ruby Tuason on Wednesday said their clients and other whistle-blowers were “disturbed” by the possibility of Janet Lim-Napoles turning state’s witness.

In a hastily called press conference, Luy’s lawyer Raji Mendoza and Tuason’s lawyer Dennis Manalo said Napoles was not fit to be a state witness and should instead be treated as an ordinary criminal making a confession.

“Even a rat, when it’s cornered, will try to fight back and try to find a way to escape,” Mendoza told reporters.

Justice Secretary Leila de Lima said she would meet next week with the original whistle-blowers in the P10-billion Priority Development Assistance Fund (PDAF) scam to assure them that they would not be sidelined despite her meeting on Monday night with Napoles, the suspected mastermind.

“The purpose of the meeting is for me to assure them that there was no secret deal, that we did not talk about the junking of any case or what. We have not yet said that she can be a state witness,” De Lima told reporters.

“The whistle-blowers know the importance of their testimonies. The whistle-blowers, I would assume and I believe, are very responsible people also. I just wish that they would not be incited [to turn against the government investigators]. They are just worried. Maybe they are thinking that Mrs. Napoles will just sow confusion—maybe, maybe not,” she said.

De Lima met with Napoles on April 21 in her room at Ospital ng Makati before the latter underwent surgery.

“For example, a murder has been committed. The NBI [National Bureau of Investigation] went and collected evidence, took fingerprints, discarded clothes and all that. They know the killer. Then the killer surfaces and confesses,” he said.

“Naturally, you can’t say you will refuse the confession. You will still accept it. But the question here is, after making that confession, will you give the killer immunity?” Manalo said.

The lawyers argued that Napoles, as the one who allegedly created the bogus NGOs (nongovernment organizations) through which tens of millions of pork barrel allocations were funneled, could not be considered less guilty than the other perpetrators of the scam.

Reacting to Napoles’ lawyer Bruce Rivera’s statement that his client was “not the mastermind” of the PDAF scam, Manalo said: “With due respect to Attorney Bruce Rivera, he has his own opinion on the evidence. Our group totally disagrees with that observation. We have a different assessment.”

Mendoza said Napoles could not be considered a credible witness, considering her previous blanket denials of the charges leveled against her in the scam.

“She should have spoken out long ago when she had the chance in the Senate. Why didn’t she take that chance?” he said.

The lawyers said that if Napoles was accepted as a state witness, her testimony could “directly contradict” the statements of the whistle-blowers and cast doubt on the entire case.

Mendoza noted that even without Napoles’ testimony, there was already a resolution from the Office of the Ombudsman. “We already have probable cause.”

But he said that at the end of the day, it would be up to the Department of Justice (DOJ). As a group, he said “we’ll have to think what will be our next move.”

Mendoza said the group was surprised when they learned the news of Napoles’ meeting with De Lima.

“We only learned about it this morning…. I fell off my seat when I heard the news,” he said. There were no ill feelings yet from the group of whistle-blowers “because there’s no final decision yet.”

Manalo said the whistle-blowers just wished to express their strong reservations against the possibility of Napoles turning state’s witness.

She recalled that during her conversation with Napoles, the latter was “not very keen about her becoming a state witness.”

On the possibility of Napoles returning the millions of pesos she allegedly took as kickbacks from ghost projects funded by lawmakers’ PDAF, De Lima declined to comment, saying, “Let’s not talk about that yet because we’re still evaluating her status.”

Asked if she would tell the whistle-blowers what Napoles told her, De Lima replied, “Not yet.”

De Lima cited her “truth-seeking duty” as justice secretary as the main reason in her decision to meet Napoles.

The DOJ chief reiterated that one of conditions of the meeting was that she would not make any commitment to Napoles that she would become a state witness, and this was accepted by Napoles.

“Our primary aim is to seek the truth. Who doesn’t want to listen to the person who is said to know many things about this matter? Who doesn’t? Maybe those who will be implicated,” she added.

De Lima recalled that when Luy’s lawyer Levi Baligod approached her, she also gave them the chance to be heard.

“Why won’t I give Mrs. Napoles the same opportunity, especially when she accepted my conditions [for the meeting]? It was not an option for me not to listen to her because what if some time in the future, I would be blamed when Mrs. Napoles would say that she had wanted to tell all but nobody wanted to listen. I don’t want to be blamed for missing a chance to speak to a major character in this issue,” she said.

On the claim of the whistle-blowers that Napoles was not a credible witness because she denied involvement in the scam during the Senate investigation, De Lima replied, “Credibility can always be raised as an issue, but what happened in the Senate? She appeared there, but we did not get anything from her, absolutely zero. But we were thinking then: It’s not true that she does not know anything. Everyone thought it was true that she did not know anything.”

De Lima said that during the meeting, Napoles was asked the same questions asked of her during the Senate hearing and she provided answers.

The secretary refused to confirm reports that 19 former and current senators were implicated by Napoles.

“I cannot tell you yet [the number and their names]. But don’t worry, I will not remove a single name [from the list provided by Napoles] and I won’t add. What she provided, you will know in due time,” De Lima said.

Pabillo said his main apprehension about Napoles being allowed to become a state witness was that the government might not see the need to hold her accountable for her wrongdoings.

He also doubted the sincerity of Napoles as state witness, saying that she was stonewalling when she first appeared in the Senate blue ribbon committee in November.

“Why only now? She should have said something earlier. But she can still tell all without being a state witness,” said the prelate.

Pabillo also said that if Napoles was ready to “spill the beans” about the scam, she must also name the other lawmakers who dipped their hands into the widely abused pork barrel. With a report from Jocelyn R. Uy