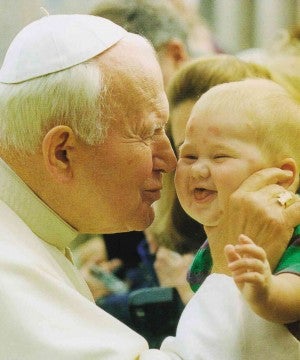 ROME—Inside a chapel on the edge of Rome, a nun uses a key to open a wooden wall panel, revealing a hidden niche. Behind glass hangs a relic of holy suffering: the bullet-pocked, bloodstained undershirt John Paul II was wearing when a gunman shot him in the stomach in St. Peter’s Square.

The short-sleeved garment bears the initials “JP,” sewn in red cotton thread on the label by nuns who did his laundry.

Jagged rips run down from the neck and sides, made when emergency room staff tore open John Paul’s shirt as they raced to save his life.

It’s one of the most remarkable of the relics of John Paul, who will be declared a saint on Sunday in the very same square where a Turkish would-be assassin shot him on May 13, 1981.

Relics of John Paul have enjoyed a boom ever since the beloved Pope was beatified in 2011.

The phenomenon has been fueled by John Paul’s longtime Polish confidant and secretary, Stanislaw Dziwisz, who doles them out to churches that request them.

The famous undergarment was discovered by the head nurse in the operating room at Rome’s Gemelli Polyclinic as she was cleaning the floor.

Nurse Anna Stanghellini, who lived out her last years at the church’s convent, donated the shirt to the nuns there, bequeathing a vivid testimony to John Paul’s physical suffering.

John Paul was the world’s first globe-trotting Pope, and he left things associated with him scattered around the world.

The Manila area restaurant where John Paul dined during his 1995 pilgrimage to the Philippines shows off the spoon, fork, water goblet, knives and table napkin—all still unwashed after his meal of grilled fish and fried shrimp.

Elsewhere in the predominantly Catholic Asian nation, shopping malls this month are showing strands of his silvery-white hair and a piece of bedsheet from his deathbed.

Irish Julia Feniquito, a 24-year-old nurse in  Quezon City, was still wearing her blue scrubs and looking to buy a dress when she passed by a traveling exhibit of John Paul relics in one shopping mall.

She kneeled to pray for several minutes in front of a makeshift altar and wrote her reflections on a sheet of paper, which she slipped into a box

under a papal skull cap.

“His aura, when you first see him, you can tell that he is very holy,” Feniquito said.

“John Paul II probably has stuff all over the place,” considering he was the third-longest serving Pontiff, said the Rev. Raymond Kupke, a professor at Seton Hall University in New Jersey. “If you think of all the places he has been to, the amount of relics is enormous.”

A tiny church in Naples packed its pews for nine days earlier this year when it displayed a gold-covered reliquary containing a drop of papal blood drawn for analysis from John Paul on his last day on Earth.

For the faithful, it’s a profoundly moving testament to the Pope’s courage in the face of death and suffering.

“This was the last blood taken from the Holy Father, his last day of life,” said the Rev. Jonas Gianneo, pastor of Santa Maria Francesca delle Cinque Piaghe church.

The pastor said the drop came from a vial of blood saved by Dziwisz, now cardinal of Krakow.

Amid the proliferation of John Paul relics, Vatican experts say, it’s important to make key distinctions: Relics are categorized by the Vatican as “first-class” (those that are part of the saint’s body, such as bones or blood), “second-class” (items owned or used by a saint) and “third-class” (mostly things that were touched by the saint).

Selling relics is sacrilegious—but nothing stops the faithful from making a “donation” to whoever provided the relic, or purchasing the often ornate container holding the relic itself. AP

First at Vatican in 60 years