Smooth Edsa ride up in 2 years, but… 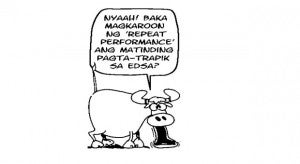 Is the Metropolitan Manila Development Authority (MMDA) unhappy with the condition of the 23-kilometer Epifanio de los Santos Avenue (Edsa)?

No less than Public Works Secretary Rogelio Singson on Thursday raised this question in a radio interview where he also said that his office was ready to discuss the issue with the MMDA.

He said the Department of Public Works and Highways (DPWH) could make Edsa as “smooth” as both the North and South Luzon Expressways (NLEx and SLEx) if the department was given the go-ahead by the MMDA to do the much-delayed asphalt overlay of the former Highway 54, the country’s busiest thoroughfare.

The MMDA has the final say on the issuance of permits to government infrastructure projects in the metropolis.

“We can make the surface of the highway smooth if given the time,” he said. “(W)e can do the major rehabilitation of Edsa, at least from Roxas Boulevard (in Pasay City) to Shaw Boulevard (in Mandaluyong City)” in time for the country’s hosting of the Asia-Pacific Economic Cooperation summit next year.

Originally, the department had planned to cover the entire stretch of Edsa from Caloocan City in the north to Pasay City in the south in its P3.74-billion program to rehabilitate the highway.

Earlier, Reynaldo Tagudando, director of the DPWH office in the National Capital Region, told the Inquirer that after the P230-million concrete reblocking of Edsa, they would push for the major rehabilitation of the thoroughfare.

The planned major repairs have been put on hold due to traffic-related issues raised by the MMDA.

Tagudando said the asphalt overlay was the “next best thing to the concrete reblocking and piecemeal repairs on Edsa.”

He said the DPWH’s “main goal is having all major roads asphalted and reach a road roughness index of between 1 and 2, where 1 is very good, 1.5 is OK while 3 is bad.”

Transforming the highway into a road as smooth as the NLEx and SLEx can be achieved in one or two years, according to Singson.

He pointed out that the highway’s deterioration over the decades showed that “our road standards have really gone down…. We are settling for roads full of potholes.”

The DPWH also stressed the need to complete the improvements on Edsa, saying the highway that was completed in 1954 was practically neglected by previous administrations.

“Only piecemeal repairs are being done there. Yet, we can equal that of both the NLEx and SLEx,” Singson said.

The department had planned to rehabilitate Edsa in three phases for at least 23 months under its Urgent Infrastructure Development Project.

While working on one phase, the rest of the highway would be open and traffic in those areas would be normal, the DPWH said.

MMDA to blame for delay of Edsa reblocking – DPWH exec

Edsa reblocking: What it means