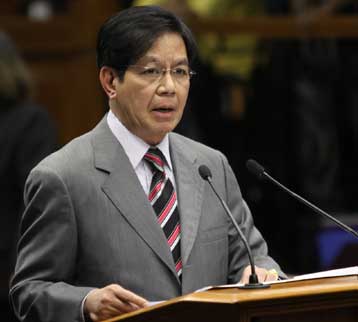 MANILA, Philippines —More senators have joined calls for former senator   and now rehabilitation czar Panfilo “Ping” Lacson to name their colleagues, who were allegedly involved in the “pork barrel” scam.

It was Lacson, who claimed Wednesday that at least 12 senators were among the more than 100 government officials during the past and present administrations who were allegedly implicated in the scam based on Janet Lim-Napoles’ draft affidavit handed to him by her husband.

“Ang appeal ko kay Senator Lacson… is to give the details and let the people mentioned defend themselves,” Senator Majority Leader Alan Peter Cayetano said during a weekly forum in the Senate on Thursday.

“But of course, si Senator Lacson, in confidence nilapitan ‘yun e so hindi ko lang alam kung ano ang pinag-usapan nila. Of course if he agreed na ilalabas ko lang ito ‘pag lumabas na si ganyan, I understand but  given  the public interest, given institutions ang nagsa-suffer dito at given the innocent [are] being lumped sum with the guilty, the more information we get, the better,”  he said.

(But of course, Senator Lacson had been approached in confidence so I don’t know what they talked about. Of course, if he agreed to release the information only when someone comes out, I understand, but given the public interest, given the institutions that are suffering and given the innocent [are] being lumped sum with the guilty, the more information we get, the better.)

The better appeal, he said, should be addressed to Napoles herself.

“Mrs. Napoless, if your conscience is bothering you or you are concerned about your spiritual, physical well-being, tell all right away. Huwag ng mag strategize, magpa-impluwensya kahit kanino…(Don’t strategize or be influenced by anyone),” Cayetano said.

He said he was not concerned for himself since he said he had no any dealings with Napoles.

“If indeed, there [are] as many involved, naming each of them is a chance to purge, cleanse and reform our institution,” Poe said in a text message.

“Senator Lacson would serve the public well if he would just release the document given to him. That way, the document would speak for itself,” Trillanes said.

Ejercito said naming those involved was “better than keeping the public hanging. Walk the talk so to speak.”

Escudero ready to defend self should name appear in Napoles’ list

Trillanes, Ejercito confident they are not in Napoles’ list