Up to Reds if they want peace or not–Palace 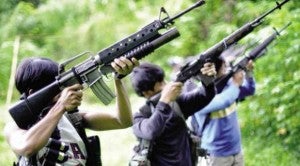 FIRING LINE Guerrillas of the New People’s Army, armed wing of the Communist Party of the Philippines, form an assault line during a visit by journalists to their camp at an undisclosed place in the Cordilleras. EV ESPIRITU/INQUIRER NORTHERN LUZON

The next move is up to the communists.

Malacañang on Saturday said it was up to the communist movement to signal their next move after another insurgent group—the Moro Islamic Liberation Front (MILF)—signed a peace agreement with the government last week.

Valte made the remarks after Armed Forces of the Philippines Chief of Staff Gen. Emmanuel Bautista was reported as saying that the Communist Party of the Philippines and the New People’s Army had degenerated into a bandit group and would be irrelevant in five years.

“We’ve always subscribed to peace negotiations as a way to put an end to their struggles. That is our point of view when it comes to that and we’ve always advocated peaceful means to settle any dispute whether it’s local or whether it’s international,” said Valte in an interview over state-run radio dzRB.

The signing of the peace accord leaves the CPP-NPA as the only insurgent group the government now has to deal with.

The government had under past administrations negotiated and signed peace agreements with such armed groups as the Moro National Liberation Front and the Cordillera People’s Liberation Army.

Valte said the CPP-NPA should give a clear signal on whether or not it wanted to return to the negotiation table to talk peace with the government.

“That is something that should be a concern to them, in the sense that they should have clear messages, at least for the public,” she said.