With NPA’s strength, peace talks an option for next president–Sison | Inquirer News 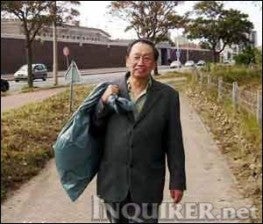 LUCENA CITY—Whoever will succeed President Aquino in 2016 should seriously consider the resumption of the aborted peace negotiation between the government and the National Democratic Front of the Philippines (NDFP), the self-exiled founder of the Communist Party of the Philippines (CPP) said Monday.

“Whoever is the next president, he or she will consider peace negotiations as an option in the face of the worsening social and political crisis and the growing strength of the people’s armed revolutionary movement for national liberation and democracy,” Jose Maria Sison, also the NDFP consultant, said in an interview through Facebook.

The NDFP is the political arm of the CPP. Its armed wing, the New People’s Army (NPA), has been waging war against the government for the past 44 years, considered as the world’s longest-running communist rebellion.

In its 45th-anniversary statement last month, the CPP said it aimed to increase its armed combatants to 25,000.

The military declined to provide specific figures on the NPA armed combatants but are convinced that the communist rebels are only less than 4,000 as of the end of 2013.

But on Friday, military spokesman Maj. Gen. Domingo Tutaan admitted that communist insurgency still remains the “most potent internal security challenge” to the country’s internal security and peace efforts of the government.

The CPP founder, now based in Utrecht, declined to comment when asked who between presidential contenders Vice President Jejomar Binay and Interior Secretary Mar Roxas, if elected, would likely call for the reopening of the peace talks.

“As chief political consultant of the NDFP in peace negotiations, I am not in the business or game of publicly estimating or predicting who is the next GPH (Government of the Philippines) president,” Sison explained.

Sison said: “The NDFP does not take responsibility for the decision of the current or next president of the GPH to resume the peace negotiations or not.”

This correspondent asked Sison what the minimum demands of the NDFP to the government are for the rebels to return to the peace negotiation table.

Sison insisted that “it is the Aquino regime that has run away from peace negotiations.”

He warned that no one “should not make it appear that the NDFP is begging for any favor from a reactionary government that refuses to fulfill its obligations and dishonors its own signature on solemnly made agreements.”

Sison maintained that the resumption of the peace negotiation rests with the government respect and compliance of all signed agreements between state representatives and the NDFP.

“The NDFP can resume peace negotiations even with the Aquino regime if it shows respect for and complies with existing agreements,” Sison said.

He said the agreements require that the government “fulfill its obligations regarding the substantive agenda of the negotiations, the safety and immunity guarantees for NDFP peace consultants and the release of political prisoners falsely accused of common crimes.”

“These are not unilateral demands or preconditions by the NDFP. They are obligations of the GPH stipulated by agreements between the GPH and NDFP,” he insisted.

According to NDFP records, more than 10 significant peace agreements have been signed and approved by the principals of both Parties since 1992.

Among these are The Hague Joint Declaration of 1992, the Joint Agreement on Safety and Immunity Guarantees (JASIG, 1995) and The Comprehensive Agreement on Respect for Human Rights and International Humanitarian Law (CARHRIHL, 1998).

Sison maintained that it was the Aquino administration and not the NDFP that ended the peace talks.

Late last month, Presidential Adviser on the Peace Process Secretary Teresita “Ging” Deles, declared that the Aquino administration was not yet closing its door to forge a peaceful solution to end the four decades of communist-led rebellion.

She vowed that the government would continue to seek ways to end the armed conflict.

The communist brushed aside Deles declaration as mere empty peace gestures that only aimed to cover up the widespread military abuses.

The NDFP had been engaged in peace negotiation with the government for the past 27 years. But the on and off peace talks have not moved beyond minor agreements.

In February 2011, the two parties met again in Norway but failed to reach a settlement particularly on issues over the release of detained communist rebels and long ceasefire.