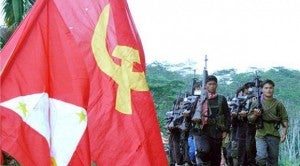 Thirteen of the 72 New People’s Army (NPA) rebels who surrendered to the military in Cagayan de Oro City were children, while a number of them were minors when they joined the insurgency, the military said, adding that this showed the communists were fielding child soldiers in its war to establish a Maoist government in the Philippines.

Armed Forces chief of staff Gen. Emmanuel Bautista, who flew in for the surrender ceremony Friday, said the recruitment of child warriors was a violation of the rules of war, and was clearly prohibited under the Comprehensive Agreement on Respect for Human Rights and International Humanitarian Law.

The event was held a day before the NPA celebrated its 45th anniversary and barely a week after the capture of the Communist Party of the Philippines’ Top 2 leaders, Benito and Wilma Tiamzon.

According to the military, most of those who surrendered were regular NPA members while the others belonged to the so-called Militia ng Bayan operating in the hinterlands of Caraga and Northern Mindanao regions. Forty-eight of them were from Bukidnon, 18 from Agusan del Sur, three from Surigao del Sur, one from Agusan del Norte and two from Misamis Oriental.

“Thirteen of those who surrendered were minors and most of them were from the indigenous communities in the hinterlands of Bukidnon, Agusan and Surigao in the Caraga region,” Bautista said.

Among those who were minors when they joined the NPA was Ronjie Salintao.  He said he was only 14 when he joined the rebel army in his hometown of Loreto, Agusan del Sur, four years ago.

Another child warrior, Jong Manlantagan, said he was also 14 when he joined the NPA in San Fernando,  Bukidnon, a known NPA lair.

“(We) do not see any government (presence) in the hinterlands and there are no services there,” he told reporters.

Manlatagan, a Manobo, said he grew tired of being with the rebels and decided to surrender.

No to child soldiers

Bautista said the NPA should stop using children as warriors. “These are just 13 child warriors who, after years of being with the NPA, decided to lay down their arms and try to live a normal life. There could be more (child warriors) out there in the mountains,” Bautista said.

The returnees received compensation for the guns they yielded. In addition to financial assistance, the rebel returnees will also be placed in the Social Integration and Livelihood Program, under which they will be given farms to tend.

Palace hits use of child soldiers by rebel group