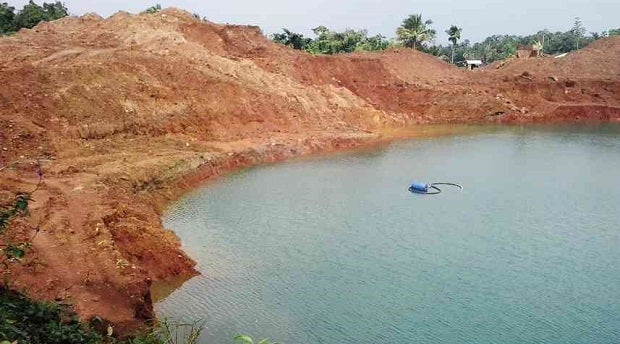 Since October 1970, Gallardo and her family, as tenant-farmers of the De Jesus family, had been planting and harvesting coconut trees for copra in Barangay Napaod, Labo town, Camarines Norte province.

She remembered how, in early 2011, she and her 12 children were expecting a better harvest compared to previous seasons because of the healthy condition of their coconut trees. But all of their dreams were sucked dry by the appearance of a deepening hole that Chinese mining company Bohai Top International Mining Corp. started digging on the property on July 26 of the same year.

The hole was the result of mining activities that extracted gold, copper and black sand from the area under the supervision of the mining company, which, Gallardo alleged, is actually owned by Camarines Norte Gov. Edgardo “Egay” Tallado.

Gallardo claimed that Tallado was using the Chinese firm as a front for his illegal mining activities.

The National Bureau of Investigation has since come in, investigating the allegations against Tallado.

“We lost everything, our livelihood and my children’s houses.  All that is left is this house my husband and I built, and a few square meters of land,” said Gallardo.

But even the land and the house are in danger, as the soil around the hole continues to soften and erode every rainy day, threatening to swallow up the last of the Gallardos’ property.

Last Feb. 7, agents from the Mines and Geosciences Bureau (MGB) and the NBI, along with a team from the Army and the Philippine National Police, swooped down on the mining facility to put a stop to the illegal mining activities there.

“I cried with joy when I saw them dismantling all the mining equipment. Finally, someone took action,” Gallardo tearfully recounted in an interview with the Inquirer.

The NBI issued a subpoena to Tallado on Feb. 24 for him to appear at its headquarters in Taft Avenue, Manila, on March 10.

The subpoena would have given Tallado the chance to answer the allegations of Gallardo’s family and the other residents in the area over his involvement in illegal mining in Labo, the governor’s hometown.

Sixto Comia, head of the Environmental Crime Division of the NBI, said in a phone interview on March 26 that Tallado had yet to appear. Comia said the NBI made repeated attempts to contact Tallado but there was no word from him.

He said the mining facility near the home of the Gallardos was dismantled due to findings that it did not have an environmental compliance certificate (ECC) as required by the MGB when it grants mining permits.

Comia added that the area was also off-limits to any mining activity because it had been identified as an agricultural area.

MGB Chief Leo Jasareno’s order to dismantle the mining facility also led to the arrest of 14 Chinese nationals who were caught in the act of supervising the mining operations on Feb. 7.

Comia said a case of illegal mining and theft of minerals was filed against the Chinese miners after Filipino employees of the facility admitted that the Chinese were their employers. Tallado was also charged with the same offense.

The Bureau of Immigration has since taken custody of the 14 Chinese miners.

“It was Tony who told me in a text message that he had given Governor Tallado the authority to mine on his land. He said he signed an agreement with him,” said Gallardo.

Gallardo said De Jesus and even employees of the mining facility, particularly a certain Polding Borja and Leo delos Angeles, who led the digging of the open pit, often referred to Tallado in conversations as the owner of the facility.

“I strongly believe that they (employees) are just using the Chinese to protect Tallado.  He is in fact the owner of that mine,” Gallardo claimed.

She said the mining activity had destroyed 222 coconut trees and the homes of her children, Ezekiel, Melchor, Julie and Junior, which were located in the area.

Aside from the loss of their livelihood, the Gallardo family also lost their main source of fresh drinking water, a natural spring that was buried in dirt and chemicals at the mouth of the pit on March 22.

On the other side of the pit, Renato Osoy, 70, said his family also lost a portion of their

6-hectare land to the miners.

His youngest sister, Ledesma, 32, said a hectare of their land was taken by the mining facility without them being notified.

“The chemicals or whatever it is that they used there are also causing our coconut trees to turn yellow and die,” Ledesma said.

Both the Gallardos and Osoys did not receive any compensation from the mining company for their losses.

It was Gallardo who took up the fight and took their complaints to the local authorities who directed her to go to the regional office of the Department of Environment and Natural Resources in Legazpi City.

She appealed to the office in 2011 not to issue an ECC to the mining company because it was destroying an agricultural land.

Henry Lopez, regional chief of the Environment Impact Assessment and Management Division of the Environmental Management Bureau (EMB), said the EMB and the MGB did not release an ECC to the mining company because the firm failed to present a rehabilitation plan when it applied for a mining permit.

Tallado, however, had released and signed temporary mining permits to the mining company, which were presented to Gallardo and the residents there.

Comia said the issuance of “temporary mining permits” was among the issues that Tallado had to explain.

He said they were also waiting for the laboratory results from the EMB, which took soil and water samples from the site to find out about any threat to the residents there.

Lopez said the yellowing of coconut trees and other plants were sure signs that mining was taking place.

He said that due to the lack of a rehabilitation plan from the company, the EMB, the MGB and local government units had been tasked to create such a plan for the place.

Comia said the NBI was also investigating landowner De Jesus but the latter could not be reached through the phone number he gave to Gallardo. De Jesus also failed to appear before investigators.

The NBI and the MGB in Daet town, Camarines Norte, have meanwhile taken hold of the heavy equipment and several sacks of black sand recovered from Labo.