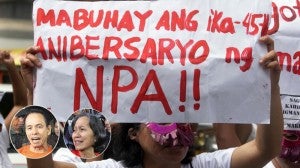 The military has a message to communist guerrillas, who are celebrating the 45th year of the New’s People Army (NPA) this week: Happy anniversary. We have your supremo. INQUIRER FILE PHOTO

MANILA, Philippines – As it congratulated its armed group the New People’s Army (NPA) during its 45th founding anniversary, the Communist Party of the Philippines (CPP) claimed it could increase its armed forces to 25,000.

In a statement, the CPP said it is looking forward to increasing its high-powered rifles to 25,000 from its current 10,000.

“It is well within the capabilities of the NPA to increase its armed strength to 25,000 soon. The NPA can do so by carrying out more frequent big and small tactical offensives against military detachments, checkpoints, police stations, private security agencies, private armies and criminal gangs with a clear aim and plan to seize more and more weapon,” the CPP said in its website.

The CPP also said the NPA is expanding due to the “prevailing socio-economic conditions and lack of political rights.”

“There is a clear baseline of strength and experience from which to make further advances… We are confident of moving forward in realizing the plan to advance from the stage of strategic defensive to the strategic stalemate in the people’s war,” the CPP said.

But the military debunked the CPP’s “propaganda” as “lies.”

The CPP said it has 110 guerrilla fronts covering 71 provinces. But Zagala said the NPA is only located in 36 provinces after the military has normalized 43 provinces.

“As far as we are concerned, they have lost their ideological mooring and relegated to an extortion and banditry group,” Zagala told INQUIRER.net by phone on Saturday.

Zagala called on the communist group to lay down their arms and seek a peaceful solution.

The NPA has been waging one of Asia’s longest-running communist insurgency.

Peace talks between government and the CPP’s political wing National Democratic Front of the Philippines broke down in April 2013 due to disagreements between both parties.

NDFP slams cops for failing to stop the brawl between leftist, Muslim youths