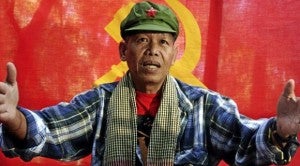 The late New People’s Army spokesman Gregorio “Ka Roger” Rosal in an INQUIRER file photo. His daughter, Andrea, was arrested by the NBI on Thursday

Andrea Rosal, her escort Rafael de Guzman and Barangay Chairman Ruben Gatchalian were arrested by the Intelligence Service of the Armed Forces of the Philippines (Isafp) and the NBI in Gatchalian’s house in Barangay 169 at Bagong Silang, Caloocan City at 7 am Thursday.

Also known as Naiya or Liam, Andrea is the alleged secretary of the NPA sub-regional military area in Southern Tagalog region. She was arrested by virtue of warrants of arrest for kidnapping and murder issued in Mauban, Quezon.

A surveillance was conducted in Brgy. 169 and there they learned that Andrea was temporarily staying in the house of Gatchalian.

Sought for her comment, Andrea denied the allegations hurled against her.

“That’s not true. I am not involved in any kidnapping or murder,” she said.

They were nabbed a few days following the arrest of CPP-NPA leaders Benito and Wilma Tiamzon.