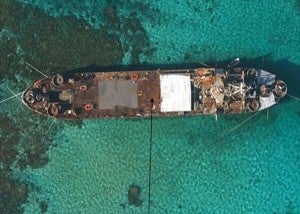 MANILA, Philippines –The civilian ship reportedly blocked by Chinese coast guards on Saturday managed to reach its destination and resupply the provisions of the BRP Sierra Madre that was stationed at the Ayungin Shoal, the military said.

“At about 3 p.m. today, the [Armed Forces of the Philippines] on board a civilian vessel was able to resupply/ reprovision and rotate troops on board LT 57 BRP Sierra Madre at Ayungin Shoal,” military spokesperson Lieutenant Colonel Ramon Zagala said in a text message to INQUIRER.net.

However, when pressed to confirm the reported harassment, Zagala said: “Pending official report. We let the media report since they witnessed it.”
Members of the media were invited on board the ship that was supposed to bring supplies to soldiers stationed at BRP Sierra Madre that has been grounded at the Ayungin Shoal, an area within the Philippines’ exclusive economic zone, but which China claims as its own.

Philippine Daily Inquirer reporter Nikko Dizon and Inquirer photographer Grig Montegrande were among those on board the ship.

“Chinese coast guards are now harassing us. They are blowing their horns, ordering us out of the area, saying we are conducting an illegal operation,’’ Dizon said in a hurried phone call to the Inquirer news desk shortly before 2 p.m. Saturday.

Dizon said one of two Chinese vessels blocking them was marked with number 3401 on its bow.

“We can see the Sierra Madre now but they (Chinese) are stopping us,” she added.

The captain maneuvered to shallow waters where the Chinese ship couldn’t sail to reach the marooned vessel, the Associated Press reported.

The incident happened a day after the Philippines announced it would file a case against China before the arbitration tribunal in the Hague over its territorial disputes with China in the West Philippine Sea.

The BRP Sierra Madre, a rusty World War-II vessel, was purposely grounded in Ayungin Shoal in 1999 as an outpost to protect the country’s territorial claim against China’s occupation of the Mischief (Panganiban) Reef in 1995.

This was not the first time Chinese vessels reportedly blocked Philippine ships in the Ayungin Shoal.

Last March 9, two Filipino civilian vessels were contracted by the Philippine Navy to conduct troop rotation and resupply operation on Ayungin but were trailed, blocked, and then expelled by the Chinese Coast Guard.

China claimed the vessels were carrying construction materials that were going to be used to build permanent structures on Ayungin.

Philippines won’t give up Ayungin shoal—DFA