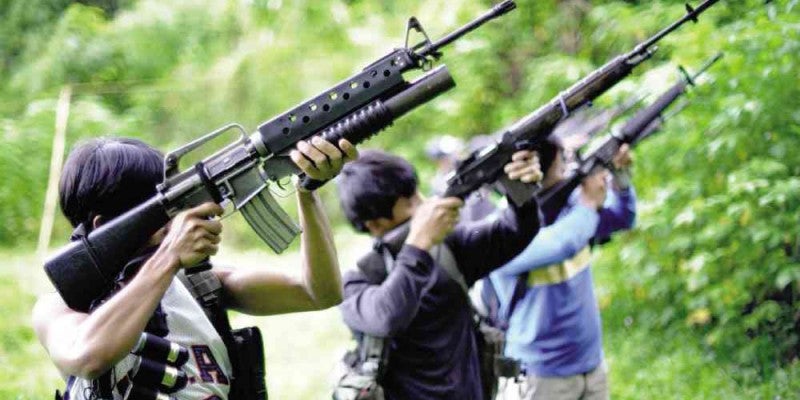 FIRING LINE Guerrillas of the New People’s Army, armed wing of the Communist Party of the Philippines, form an assault line during a visit by journalists to their camp at an undisclosed place in the Cordilleras. EV ESPIRITU/INQUIRER NORTHERN LUZON

BAGUIO CITY—As far as communist rebels in the Cordilleras are concerned, the prospect of forging a peace agreement with the Aquino administration is bleak, citing the government’s failure to implement an initial accord on respect for human rights and recent air strikes that left two teenagers wounded.

“We are always open to the resumption of peace talks, but it’s the government that has made [this difficult] as it continues to commit rights abuses against the people. This is the policy that was carried on by the Aquino administration from the Arroyo administration, through its Oplan Bantay Laya,” said Diego Wadagan, spokesman of the New People’s Army’s (NPA) Agustin Begnalen Command operating in Abra.

In an interview with the Inquirer at an NPA upland camp last month, Wadagan lamented that the government had failed to implement the Comprehensive Agreement on Respect for Human Rights and International Humanitarian Law (Carhrihl), which was signed by the Philippine government and the National Democratic Front (NDF) in 1998.

According to the Philippine government website, www.gov.ph, the Carhrihl is the first of four substantive peace agenda items that will constitute the final peace settlement with the NDF to end the 44-year insurgency. Carhrihl, it said, “seeks to uphold principles of human rights and international humanitarian law in the context of armed conflict.”

Wadagan said the government’s counterinsurgency program, Oplan Bayanihan, had resulted in more rights violations in communities where the military was operating.

For example, the Abra Human Rights Alliance (Ahra) blamed the military for wounding two minors, aged 13 and 17, when it launched air strikes that hit rice fields and residential areas in the villages of Lat-ey and Alligang in Malibcong, Abra, on May 31.

“We condemn these air strikes that hurt civilians and destroyed their sources of livelihood. Even in times of armed conflict and counterinsurgency operations, the military is bound by international human rights instruments and the Carhrihl to void endangering the lives and dwellings of civilians,” Ahra said in a statement.

Aside from failing to address rights abuses, the government refused to recognize the political authority of the NDF in the peace process, said Tipon Gil-ayab, spokesman of the NPA Lejo Cawilan Command operating in Kalinga.

“Now that the Carhrihl is not being implemented, how can the peace talks move forward under this administration?” Gil-ayab said.

The government panel negotiating peace with the CPP-NPA-NDF earlier announced that it may no longer resume formal talks, which had been stalled for 22 months, unless the government and the NDF agree on a new negotiating framework.

The Inquirer, since Friday, had been trying to reach officials of the Office of the Presidential Adviser on the Peace Process (Opapp) for updates on the peace talks with communist rebels but did not get a response as of Sunday.

On its website, however, the Opapp reported that it had conducted basic orientation seminars on Carhrihl for the military in 2012.

In an article posted on the Opapp website last month, Presidential Adviser on the Peace Process Teresita Quintos Deles said talks with the CPP-NPA-NDF should have a clear agenda for ending violence and bringing peace.

“Peace talks should have a clear relation to the reduction, if not the cessation, of hostilities that can be felt by the people right away. We have sensed a disconnect between the peace table and the situation on the ground, so that more and more people have become skeptical about the peace process,” the article quoted Deles as telling the Foreign Correspondents Association of the Philippines (Focap) during a forum in Makati City in early May.

In that same article, Deles said a new approach in pursuing peace talks would not involve the government panel in local peace processes.

“Local people have primacy over how they want peace to happen in their areas,” she said.

She cited the concept of “peace zones” in Sagada, Mt. Province, and Tulunan, North Cotabato, as examples of how locals can be instrumental in promoting peace in their communities.

But Wadagan and Gil-ayab told the Inquirer that the CPP-NPA-NDF would never participate in localized peace negotiations.

In a statement last week, Marie Hilao-Enriquez, chairperson of the human rights group Karapatan, said the International Association of Democratic Lawyers (IADL) had called on the Aquino administration to hold human rights violators accountable and to continue peace negotiations.

“We call on the parties to resume the negotiations based on their previous agreements to earnestly, patiently and sincerely address and comprehensively resolve the underlying social, economic and political reasons for the armed conflict and resistance,” the IADL said in its May 27 resolution.