500 volunteers from Mindanao to help in relief, rehabilitation ops 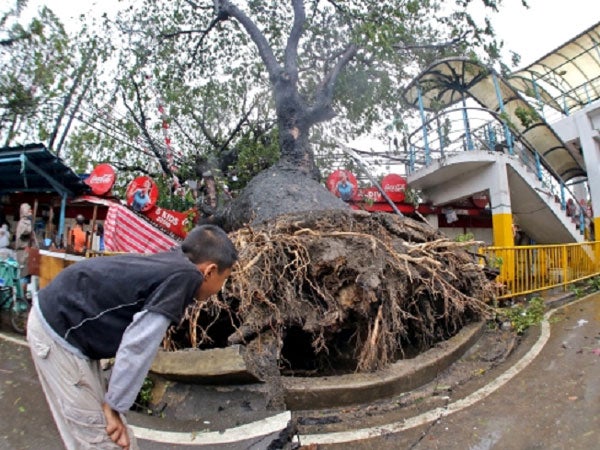 A boy looks at the roots of a fallen acacia tree in front of Mabolo church in Cebu after typhoon Yolanda. CDN FILE PHOTO

Working under the Mindanao Caravan Relief Outreach for Victims of Typhoon Yolanda, the volunteers said they would like to show their deepest solidarity to those in Leyte and other Visayas areas and provide much-needed medical and other services to the survivors of the devastating typhoon.

The people of Mindanao have become an example of resilience as they lived through a series of disasters, most of which man-made.

Morales said the people of the island also wanted to show to Yolanda victims opportunities to regain things lost in each tragedy as in the cases of typhoons Sendong and Pablo victims.

Months after the devastation wrought by the two cyclones, the people of northern and southern Mindanao have started regaining their lost livelihoods and many of them have resettled in their old homes, although some of it have yet to be fully rebuilt.

As this developed, the Habitat for Humanity Philippines has appealed “to benevolent hardware owners and individuals or groups to donate more shelter repair kits” for Yolanda victims.

“Shelter is one of the three basic needs of humanity aside from food and clothing,” Serranillo said.

She said Habitat was concerned that there were many homeless victims — especially the women and children — as they become more vulnerable to acts of lawlessness.

“That is our advocacy because we are thinking of the protection of the victims particularly women and children who are vulnerable to criminal activities like rape or sexual harassment,” Serranillo said.

She said they have targeted to build 10,000 houses for families whose houses were destroyed, and distribute shelter repair kits for those whose houses can still be repaired.

The organization would also distribute 50,000 cleaning kits for the survivors, Serranillo said.

Aside from building or repairing shelters, Serranillo said Habitat has also partnered with Biosand Filters Philippines (BFP) for the installation of water stations in Yolanda devastated areas.

Each water station could serve a thousand individuals, according to Darrel Nelson, BFP chief executive officer.

Initially, six water stations will be installed in Ormoc City, one of the hardest hit areas by Yolanda, according to Serranillo.

She said Habitat also sent volunteers to the other Yolanda-hit areas of Leyte, Cebu, Palawan to assess and identify the areas to install the water stations in.

“Habitat is working closely also with the Department of Social Welfare and Development and the local government units of the Yolanda-hit areas in relation to the identification of the beneficiaries,” Serranillos said.