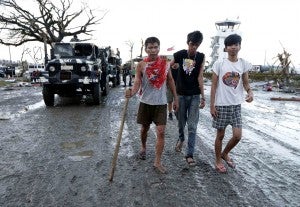 TACLOBAN, Philippines — A Roman Catholic priest has led dozens of displaced typhoon survivors on a march through this shattered city aimed at boosting spirits.

The marchers sang “We shall overcome” as they toured parts of Tacloban on Tuesday.

A major international relief mission is underway to help the survivors, many of whom will be dependent on aid for months to come.

The United Nation’s humanitarian chief said she was impressed with developments in the region over the last week.

Valerie Amos says she was “really delighted that so much progress has been made, so much more aid is going out, and the people are getting the vital supplies that they need.”