In the decision authored by Associate Justice Estela Perlas Bernabe, the high court declared as unconstitutional the entire 2013 PDAF.

The high court also nullifies “all legal provisions of past and present Congressional Pork Barrel laws, such as the previous PDAF and Countrywide Development Fund (CDF) articles and the various Congressional Insertions, which authorize/d legislators-whether individually or collectively organized into committees—to intervene, assume or participate in any of the various post-enactment stages of the budget execution.”

At the same time, the high court also nullified the laws that provided lawmakers lump-sum allocations to fund their chosen projects.

“All informal practices of similar import and effect, which the Court similarly deems to be acts of grave abuse of discretion amounting to lack or excess of discretion,” are also declared void.

“Accordingly the Court’s temporary injunction dated Sept. 10, 2013 is hereby declared to be permanent. Thus, the disbursement/release of the remaining PDAF funds allocated for the year 2013, as well as for all previous years…are hereby enjoined,” the high court said.

The high court ordered the Department of Justice and the Office of the Ombudsman to investigate and file the needed cases against all government officials as well as private individuals involved in the improper disbursement of PDAF.

Among those who separately petitioned the court to scrap the PDAF system are losing senatorial candidates Samson Alcantara and Greco Belgica.

Petitioners pointed out that the system on discretionary funds of both Congress and Malacañang violated the constitutional limits given to the executive and the legislative because they were able to spend money beyond what was approved by Congress “since these are lump sum funds.”

On the other hand, the government through the Office of the Solicitor General said the high court has upheld the constitutionality of the PDAF system in previous cases, including LAMP vs. DBM.

Below is a copy of the Supreme Court ruling: 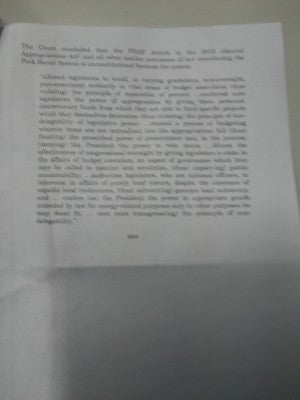 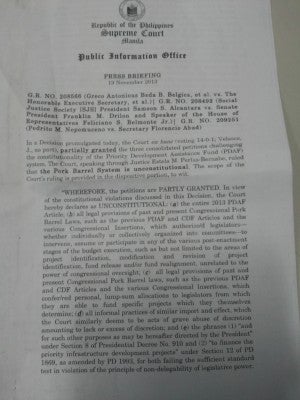 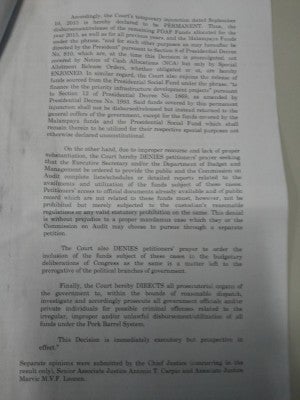