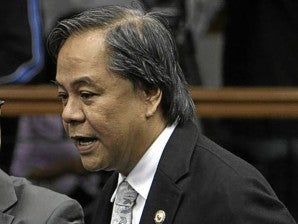 MANILA, Philippines – Take it or waive it.

That’s the message Monday of some lawmakers to their colleagues who are campaigning for the abolition of the scandal-rocked Priority Development Assistance Fund (PDAF) or pork barrel funds.

Pro-pork barrel legislators at the House of Representatives vowed to fight for the retention of the funds for congressional initiatives.

Various groups, including partylist members of the militant bloc, Makabayan Coalition, and the Catholic Bishops Conference of the Philippines (CBCP) have called for the suspension or scrapping of the pork barrel. In the proposed P2.268-trillion national budget next year, P27 billion was earmarked for the pork barrel.

Backing Speaker Feliciano Belmonte’s stand to retain the pork barrel, House Deputy Speaker and Isabela Fourth District Rep. Giorgidi Aggabao said that those who are not in favor of the fund distribution should simply give it up.

The lawmaker cited the merits of the pork barrel funds. “I am for the retention of PDAF because it is a huge help to the needy. It pays for scholarships of poor students, hospital bills of indigent patients, burial expenses of paupers, among others.  Of course, it has been abused and corrupted by some. But the remedy is not to eliminate the fund but to tighten the audit of disbursement,” Aggabao said.

Aggabao said that all of his PDAF disbursements to the provincial government are “open to scrutiny by anyone even without his knowledge or permission.”

“There is no confidentiality involved in the manner by which my PDAF is spent. For 2014, my PDAF will pay again for the schooling of my scholars, hospital and medical expenses of indigents, and generally, financial assistance to the needy. I plan additionally to pay for the PhilHealth premium of farmers,” the Isabela congressman said.

First-term Parañaque City Rep. Gustavo Tambunting said he is for the PDAF retention and its judicious use.

“To enhance the PDAF’s transparent use, it should be mandated that PDAF-funded projects be regularly published in print media and in social media,” Tambunting said.

For 2014, Tambunting plans to use his pork on “relevant and necessary infrastructure, education, health and livelihood projects for his constituents.”

Meanwhile, neophyte Rep. Samuel Pagdilao said that pork barrel is a matter of choice for each congressman to make since it is “not illegal per se.”

“The power of appropriation carries with it the power to specify projects or activities to be funded under the Appropriations Law (Philconsa vs. Enriquez, Aug 19, 1994). The power of appropriation by Congress includes the power to designate where people’s money should go like assigning certain funds called PDAF to be spent for certain projects that will directly benefit the people. If the funds do not go to the projects intended to due to some manipulation or hocus pocus, where the money ends up in private pockets, that is where it is wrong,” said Pagdilao.

Pagdilao, the representative of Anti-Crime Community Involvement and Support (ACT-CIS) partylist, suggested that projects financed by the PDAF must be “monitored, recorded and reported” after completing the project to ensure its transparent use.

Irregularities, not PDAF per se

Siquijor Rep. Marie Anne Pernes, on the other hand, described the PDAF as an “equalizer in the grossly unequal distribution of government funds” essential to provinces with limited budget.

Pernes said the PDAF should not be singled out as other government funds are also being misused.

“We should go after the perpetrators of irregularities, prosecute them, and ensure the swift resolution of their cases,” she said.

Belmonte said that lawmakers seeking for the scrapping of PDAF should follow the practice of former Senators Joker Arroyo and Panfilo Lacson who declined their annual PDAF allocation of P200 million.

Meanwhile, President Benigno Aquino III, through Deputy Spokeswoman Abigail Valte, said that PDAF is the “share” of the people in the annual national budget.
Valte said that lawmakers can use the funds to address the needs of their people since the government “cannot be everywhere at once.”