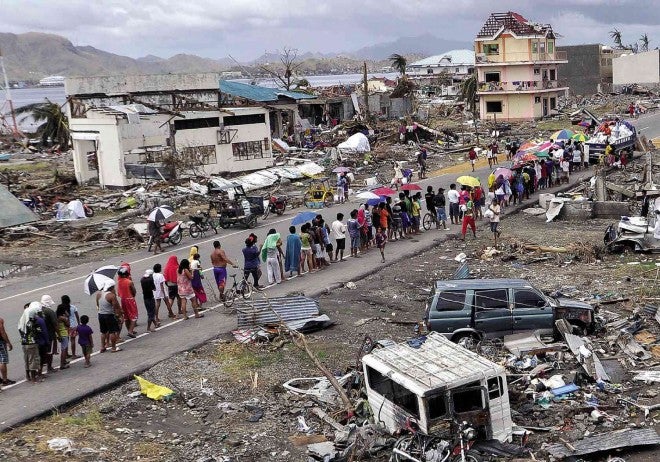 Victims of Supertyphoon “Yolanda” line up for food behind a Department of Social Welfare and Development relief truck amid the ruins of Barangay 88 in San Jose, Tacloban City, on Saturday. RICHARD REYES

MANILA, Philippines – Senate Pro Tempore Ralph Recto is proposing to slash the government’s spending for travel, utilities and communications in 2014 by at least P1.7 billion and instead use the money for calamity relief efforts.

“By simply deducting P500 million from the bureaucracy’s P12.3 billion travel fund for 2014, we can already build 900 temporary bunkhouses that can house 10,800 families,”  Recto said in his co-sponsorship speech on Tuesday for the proposed  P2.268 trillion national budget next year.

“By lopping off P1 billion from the P12.1 billion allotted for utilities like electricity and water, we can have the money to repair 3,000 classrooms.”

The senator also proposed that the P30 billion risk management program and the P25 billion debt management program be realigned for the rebuilding of hospitals and schools, the construction of homes, and additional subsidy to local governments.

Recto said the proposed budget next year “must be amended, adjusted so that it could meet new challenges which were not present during its creation.”

In just the past 90 days, Recto said, the country had been hit by two typhoons;  a 7.2 magnitude quake; and a failed insurgent takeover of Zamboanga City.

“The damage from the quadruple hits is so great that it is as if disasters had chosen the Philippines as their convention site this year,” he said.

“Against this backdrop, what should we do with the proposed budget before us? Will we just let it stand as it is with cosmetic editorial corrections? Or shall we recast it so it can be a tool for reconstruction?”

But Recto, an administration ally, clarified that he was not calling for a total overhaul of the proposed budget.

“There is no need to unleash the budgetary equivalent of Yolanda which will leave no item standing in the General Appropriations Bill,” he said of the recent typhoon that struck and affected millions of people in Eastern Visayas.

“What I am proposing is that we tweak the budget to carve budget space for the reconstruction of Zamboanga, Bohol and Santi- and Yolanda-damaged places,” he said.

But Recto said that any amendments in the proposed budget may just end up being vetoed by the President.

“I cannot, however, divine, Mr. President, what will become of our proposals. The threat of a veto is always there. The possibility of their non-acceptance by the Bigger House can’t be ruled out.”

“But instead of being immobilized by fear, let us act on the belief that the better angels of their nature will prevail,” the senator added.

Yolanda: After the storm

Read Next
Romualdez: Letter form of resignation
EDITORS' PICK
Print media group seeks tax breaks
PH study shows 1 in 4 COVID patients at risk for stroke
SC asked to compel gov’t action vs plastic pollution
Work-From-Home is here to stay and requires reliable logistics
Climate Change Commission and Nestlé PH to discover sustainability-focused solutions
Legarda emphasizes role of ICC/IPs in nation building this IP month
MOST READ
Drivers now required to take driver’s education upon license renewal – LTO
Gordon to Duterte: You? Teaching me courtesy?
Can Marcos Jr. be disqualified?
Marcos Jr’s ‘special diploma’ from Oxford: You can have it, too
Don't miss out on the latest news and information.