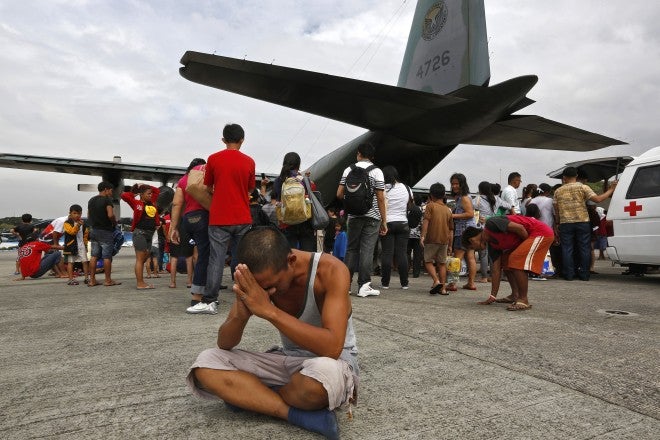 MANILA, Philippines — As the main gateway to Metro Manila of thousands of evacuees fleeing their typhoon-ravaged homes in the Visayas region, Villamor Airbase in Pasay city has been abuzz with human activity in the past week.

By 5 p.m. on Sunday alone, the military airport already received 10 C-130 planes of evacuees, Bonoan said, in an interview at the Villamor Airbase grandstand.

But Bonoan noted the volunteers readily matched that number. “We have a long list of volunteers. Thousands. It’s almost a challenge, but at least we know the arrivals are served. We can’t reject the volunteers because we’re here 24/7. We even have repacking operations at the [Villamor Airbase] gym,” Bonoan said.

On Sunday, dazed arrivals were welcomed by volunteers, showering them with applause, ready meals, medicine, counseling, even sheer company.

Logistical services were also made available to the arrivals, such as free calls and transportation, provided by businesses, non-government organizations and civilian volunteers in close coordination with social workers.

At the parking lot behind the grandstand, tents, offering various free services, have been set up by organizations and local government units.

Most tents gave away packs of food or water. One tent had volunteers sifting through clothing and toys for donations. Some stalls offered medical checkups, vaccinations, medicines. Some tents were set up to process volunteers and donors.

One tent was for “Nanay Bayanihan,” set up to temporarily shelter the evacuee-mothers and their young children. At the tent, the infants and toddlers could comfortably sleep on pillows and mats. Their specific needs are attended to, such as diapers, toys and playtime, and breastmilk, with volunteer-mothers acting as wet nurses.

Another busy service was “Oplan Hatid.” Over the week, volunteer drivers have gone to register in the hundreds, offering to drive the survivors to their known relatives in Metro Manila, or to bus stations. On Sunday, around 200 drivers had signed up, to chauffeur around 800 evacuees.

On Saturday, one man had even agreed to chauffeur a family as far as Baguio, said volunteer Leah Lagmay.  Another volunteer had then stepped forward to give him a gas voucher for P5,000.

“Until now, it’s giving me goosebumps. It has restored my faith in humanity!” Lagmay said.

Lagmay said “Oplan Hatid” needed volunteer-drivers most during weekdays, and on evenings. As the arrival schedules of the evacuees tend to change, drivers may need to be flexible and to be ready to dedicate hours for the task.

Bonoan said that as of Saturday, 200 evacuees, without relatives in Metro Manila, had been forwarded to shelters run by the agency or

She confirmed plans by the Pasay city government to put up a nearby tent city for the evacuees. Pasay city administrator Dennis Acorda said the tent city is currently being set up at the Villamor Airbase Elementary School. Earlier, he said the local government hopes the site could accommodate a maximum of 400 evacuees.

“We are now preparing long-term for those without relatives here. We assess their capabilities for employment. But many people have come forward, also offering job opportunities. We’re happy about that,” Bonoan said.