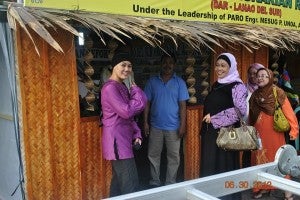 COTABATO CITY, Philippines—Poverty did not deter Maranao Muslims in Marawi City to pitch in for the “piso-piso” fund drive, which was intended to collect as much cash for the benefit of supertyphoon Yolanda victims in Samar and Leyte.

Marawi City is part of the Autonomous Region in Muslim Mindanao (ARMM), which is always on top of the list of the country’s poorest regions.

While the fund drive might not have raised millions of pesos, the “thousand pesos that people from all walks of life” gave proved that one does not need to be rich to be able to help those in distress, according to Maranao civic leader Samira Gutoc.

“Imagine the drive garnering almost P100,000 in 9 days, which we could already use to buy rice, maggi (instant noodles) and tuna to be delivered to Visayas,” she said.

Gutoc, also former lawmaker of the Autonomous Region in Muslim Mindanao, said it was “very touching to see people from all levels of life share whatever they have for the typhoon victims.”

“Each one, patak-patak—like passing the hat for someone in need—came together in the spirit of oneness with the pain of Visayas calamity victims. Every mother or son, classmate or barkada, teacher and student, tricycle driver or school superintendent personally passed by a drop-off point for Oplan Tabang Visayas,” Gutoc said in a statement.

For those who did not have cash, she said they handed over clothes and other basic necessities.

Volunteers also laid down prayers mats around the Marawi City public market to solicit for contributions while others urged residents to pack their used clothes or excess food and send them to the typhoon victims.

“Bayanihan and the Islamic value of charity also manifested in this endeavor,” Gutoc said.

As this developed, ARMM Gov. Mujiv Hataman announced that a 10-vehicle convoy of food and non-food items left for Yolanda-devastated areas from this city on Tuesday.

“This is the second batch of the region’s relief mission to areas badly hit by super storm Yolanda that left untold casualties, displaced and wrecked

lives, and where victims were mostly suffering from hunger and without shelter,” Hataman said.

No political color in relief efforts for ‘Yolanda’ victims – Almendras