No political color in relief efforts for ‘Yolanda’ victims – Almendras 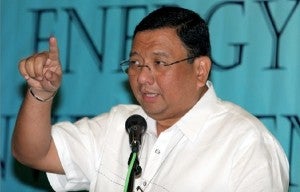 However, he also mentioned reports of residents not receiving relief goods because of “political considerations.”

“This is a time na walang kulay. Regardless of what your family name is, we are going to work together to make this happen,” Almendras said in a televised press conference at Malacañang.

(This is a time when political color should not matter. Regardless of what your family name is, we are going to work together to make this happen.)

He was reacting to observations that the Liberal Party-led administration was working with Tacloban City Mayor Alfred Romualdez of the Nacionalista Party, nephew of Ilocos Norte Representative and former first lady Imelda R. Marcos.

“Prankahan lang po. Meron din akong natatanggap na reports kaya may mga tao na nagsasabing wala pa rin kaming natatanggap yet I know na may dineliver na into some of those areas is there seems to be a political consideration,” he said.

(I’m going to be frank. I’ve been receiving reports that the reason people are saying they have not received any relief although I know that it has been delivered into some of those areas is because there seems to be a political consideration.)

However, when asked by another reporter, Almendras said what he received was “a report” that has yet to be confirmed.

“I acknowledge that I hear such reports. These are not confirmed. We are not sure of that. I would like to think that there are more people who would do the right thing,” he said.

Nevertheless, Almendras pointed out that it was the reason Social Welfare and Development Secretary Corazon “Dinky” Soliman is in Tacloban City, “to go full blast without having to go to some of those challenges.”

“Secretary Dinky (Soliman) has decided that there really are some LGUs na talagang (that are really)…I don’t want to use hindi mapagkakatiwalaan (cannot be trusted) – there are some LGUs that will be very effective in distribution,” he said.

The Cabinet Secretary said there are already two distribution points – one at the airport and another at the city hall – in Tacloban City, which is among the most devastated areas by the typhoon.

He said they are considering opening up two more distribution sites to make it easier for the survivors, who are forced to walk long distances because of the lack of transportation in the city, to receive aid.

“We want to move as many resources to as many people as much as we can,” he said.

Almendras said the national government also had to step up and facilitate the relief efforts because many of the local officials were also victims of what is considered among the world’s strongest typhoons.

“We’re not blaming them. We’re saying we’re acknowledging the fact that some of the areas hindi pa po alam, hindi pa mahanap si barangay captain (the people do not know, cannot find the village chief),” he said.

“The important thing is to restore the government structure.”

Almendras said they are hoping the local governments would be able to function again through the village heads or other people who can take on the role.

“The process will be faster when that happens,” he said in Filipino.