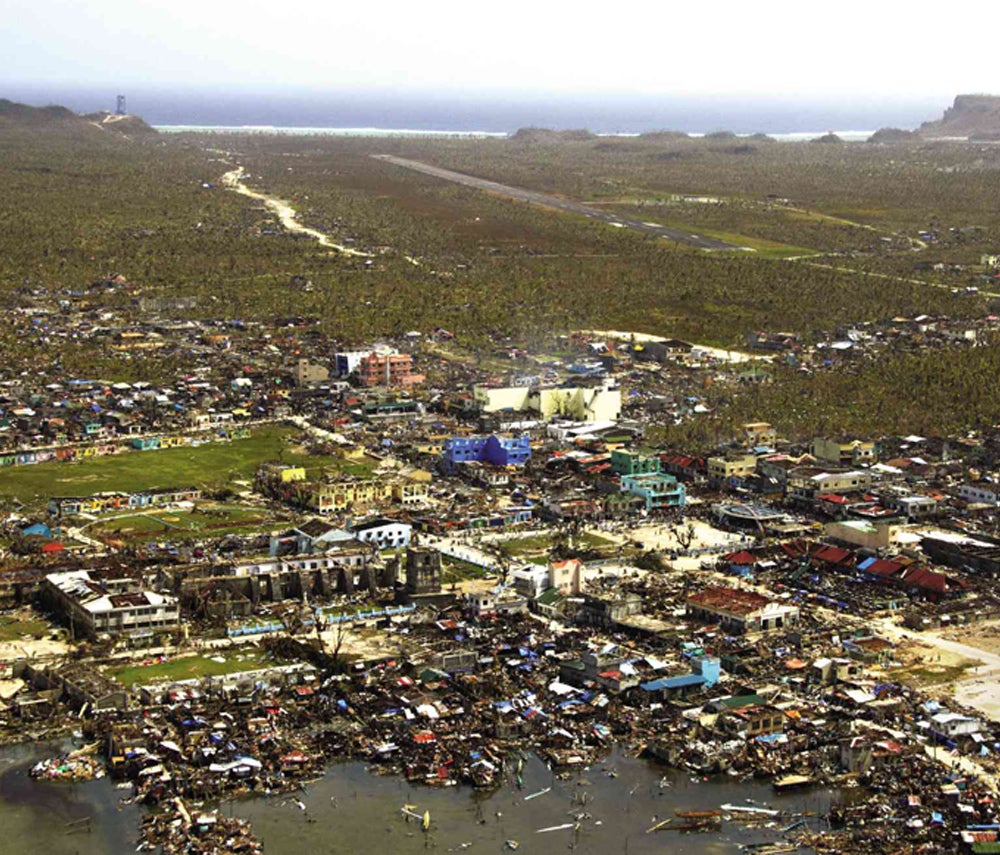 RUINS WHERE ‘YOLANDA’ MADE FIRST LANDFALL The historic Church of the Immaculate Conception (roofless rectangle building with bell tower) in Guiuan, Samar province, lies in ruins like most structures in the town of Eastern Samar. Hailed as a National Cultural Treasure by the National Museum, the church was built by the Jesuits in the early 18th century. JOHN CHUA/INQUIRER CORRESPONDENT

Yolanda, one of the strongest typhoons recorded in history, also left 3,365 injured and 80 remain missing.

No further details were given as of posting time.

Meanwhile, amphibious vehicles carrying hundreds of US Marines have been ordered into action to help relief efforts in the hard-to-reach typhoon disaster zone.

The ships will ferry hundreds of troops into storm-ravaged parts of the country where broken infrastructure is badly hampering aid deliveries and adding to a growing sense of desperation among survivors of the horrendous storm.

The deployment, which will see the vessels sent from southern Japan, is the latest US contribution to the global bid to help the Philippines, which is staggering under the weight of possibly its worst-ever humanitarian disaster.

Osprey tilt-rotor aircraft, which were deployed earlier this week and can land and take off like a helicopter but fly like a plane, and amphibious assault vehicles give the US military greater reach in a region where many communities are still cut off.

Aircraft carrier the USS George Washington, with 5,000 sailors and more than 80 aircraft aboard, along with five warships from its battle group, were heading to the Philippines to join more than 200 US Marines already on the ground. A British warship was also on its way to the Philippines.

The UN estimates that more than 11.3 million Filipinos have been affected, with 673,000 made homeless, since Haiyan — one of the most powerful typhoons ever — smashed into the nation’s central islands on Friday.

The UN on Tuesday launched a flash appeal for $301 million to help with the immediate aftermath of the disaster, which it has said could have already cost 10,000 lives.

Other significant aid steps include:

— Britain said it was offering 14 million pounds ($22 million) in disaster relief and ongoing prevention programmes. A public appeal by an umbrella group of charities in the UK has also been launched, with London committing itself to matching the first five million pounds donated, taking its total commitment so far to as much as $30 million.

— The International Labour Organization said it was working to put in place emergency employment and cash-for-work programmes as part of the UN’s appeal. The ILO estimates that three million people have lost their livelihoods, at least temporarily. It says nearly half of these are vulnerable workers — subsistence farmers or fishermen.

— The Mexican government announced Tuesday that it was donating $1 million to help victims of the super typhoon in the Philippines.

— The United Arab Emirates, Australia and Japan have pledged $10 million each.

— Indonesia has offered $2 million in cash and emergency supplies, along with a transport plane packed with food, medicines, water filters and generators.

— The European Commission said it would give 13 million euros ($17 million).

— Canada has promised up to $5 million to aid organisations.

— Malaysia readied a relief crew and Singapore offered cash aid, while India said it was sending an aircraft with 15 tonnes of relief materials.

— China, where the typhoon killed several people, is to give $100,000 towards the aid effort.

— Vietnam, itself faced with mass evacuations as a weakened Haiyan swung through its territory Monday, has offered aid worth $100,000.

— Germany’s embassy in Manila said an initial shipment of 23 tonnes of aid was being flown in and German rescue teams were already at work.

— The ASEAN Coordinating Centre for Humanitarian Assistance on Disaster Management will send an initial $500,000 in aid from Subang in Malaysia.

— Medecins Sans Frontieres (Doctors Without Borders) said it was sending 329 tonnes of medical and relief items which will arrive in Cebu within the next few days in four cargo planes. With a report from Agence France Presse