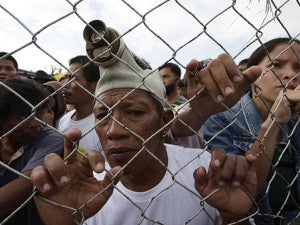 MANILA, Philippines – As survivors search for food in typhoon-ravaged areas of the country, eight people were crushed to death when a National Food Authority (NFA) warehouse in Alangalang town in Leyte collapsed.

NFA Public Affairs head Rex Estoperez told Radyo Inquirer 990AM that the eight people were among the many people who stormed the warehouse in hopes of getting rice for their families.

(“Because of our countrymen who are in need…our warehouse was broken into and all of the 33,000 bags of rice were taken,” he said.)

Estoperez said their warehouse in Alangalang was supposed to be the most secure, containing 33,000 sacks of rice and 96,000 sacks of palay.

Citing reports from the ground, he said the massive number of people who stormed into the warehouse caused its collapse.

Estoperez did not blame the people, but said they have been ordered to secure all NFA warehouses in Region VI to ensure the orderly distribution of food supplies.

He said 16,000 sacks of rice and palay in their NFA warehouse in Tacloban City were put to waste because of the typhoon.

Police, soldiers and private security teams were guarding the storeroom in Alangalang town, 17 kilometers (10 miles) from Tacloban, but were overpowered by the crowd, Estoperez added.

“There must have been so many people to carry away so many bags of rice,” he said, adding that each bag weighed 50 kilograms.

“Our staff were there but they could not do anything without risking their safety.”

Estoperez said his agency believed looters were looking to profit by selling the grain.

“Some people are really hungry but others just wanted to ransack for money,” he said, adding that the food authority was coordinating with the transport department and military to ensure that ships and trucks carrying rice would be properly guarded.

The United Nations fears that 10,000 people may have died in Tacloban alone when Yolanda, the strongest typhoon in the world this year and one of the most powerful ever recorded, smashed into the Philippines’ central islands on Friday.

The typhoon left huge areas isolated and hundreds of thousands homeless and hungry, largely across Leyte island where Tacloban is the provincial capital.

Overwhelmed and under-resourced rescue workers have been unable to provide enough food, water, medicines, shelter and other relief supplies to many survivors, and desperation has been building across the disaster zones.

Hundreds of soldiers, police and armored vehicles are deployed in Tacloban city where checkpoints have been set up and a nighttime curfew imposed to help contain looting. With a report from Agence France Presse