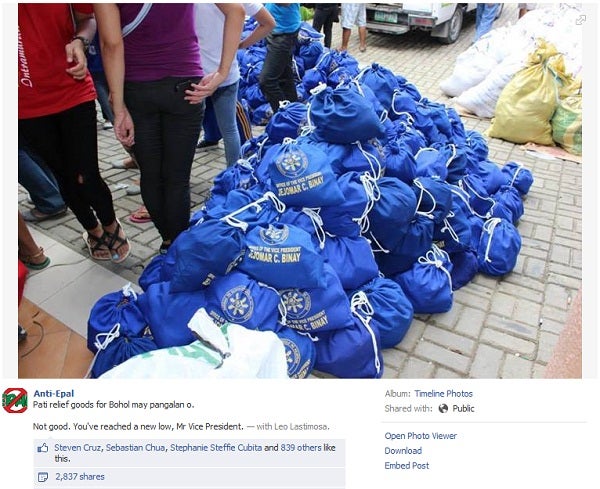 SURIGAO CITY, Philippines — Vice President Jejomar Binay is seeing a conspiracy behind the negative posts on social media deriding him as an “epal,” or one who is constantly trying to draw attention to himself.

Vice President Binay has been on the receiving end of social media backlash after photos of relief goods labeled with his name and plastered with the Vice President’s logo became viral. The relief goods are intended for victims of typhoon Yolanda (international name: Haiyan).

Binay admitted the relief goods were donated in his name by a businessman-friend in Iloilo, and had been intended for typhoon-hit Capiz and neighboring areas.

“But I did not instruct my friend to put my name on it,” Binay, who was here Wednesday to inaugurate a housing project by the Surigao del Norte provincial government, told reporters.

“I had no control over the labeling but when I was informed about this, I had them removed.”

Binay claimed that as early as August 2012, his camp has uncovered an “organized” online campaign to soil his image.

He did not name names, but he attributed the supposed online smear campaign to a “potential presidential candidate in 2016.” The goal, according to him, is to derail his presidential ambitions—something which Binay has admitted.

Incidentally, the same ambition has been cited by netizens as the main factor in his seeming fondness for public attention.

From armed conflict to disasters, Binay has drawn flak for inserting himself and appearing to be swinging on an early campaign mode.

He also faced accusations of politicking after he caused public confusion following his announcement that a truce had been reached between government forces and forces loyal to Moro National Liberation Front (MNLF) founding chair Nur Misuari.

That announcement turned out to be false and Binay was chided for his unauthorized attempt to discuss a truce with the rebels.

Binay not authorized to negotiate with Misuari—Cabinet execs