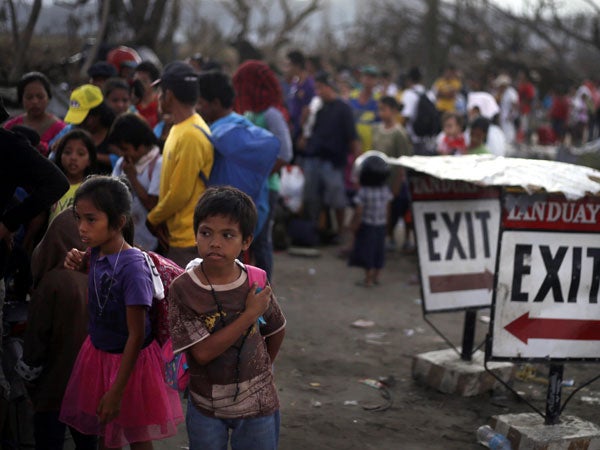 Typhoon Haiyan survivors queue up to get into any evacuation flight at the airport in Tacloban. AP FILE PHOTO

This will be the fourth year since 2010 that the event, which has always been looked forward to by every employee, will not be held.

In 2011, it was canceled in deference to the victims of typhoon Sendong and in 2012, following the devastation wrought by typhoon Pablo.

Each year it was canceled, nobody complained aloud and that was the same benign reaction when Plaza announced on Monday that the budget intended for it would be used for the relief assistance to victims of super typhoon Yolanda in Eastern Samar.

Plaza said he was also hoping that employees would pitch in whatever amount they could generate more funds for Yolanda victims.

The donations could be coursed through the “Provincial Government of Agusan del Sur 1-4-3 (PGAS 1-4-) Program for Yolanda Victims.”

He said provincial officials, capitol employees and kind residents could spend a more meaningful Christmas for this “act of humanitarian cause.”

Provincial Administrator Jesusisimo Ronquillo said the provincial government has allocated a total of P4 million for the purchase of 1,500 sacks of rice from the National Food Authority and hundreds of boxes of canned goods.

As soon as the announcement was made, employees and policemen from the Provincial Police Office started repacking the relief goods at the Covered Court of the D.O. Plaza Sports Complex.

Plaza said each pack of food items to be packed would include one can of biscuits, four pieces of canned goods and three pieces of bottled water aside from eight kilos of rice. The food packs will be distributed to thousands of Yolanda victims.

Vice Governor Santi Cane Jr., he said, would lead the relief operations, which would also be joined by a rescue team from Search and Rescue of Agusan del Sur (Saras), policemen, Army soldiers and civilian volunteers.

The team would proceed to Borongan City in Eastern Samar, one of the areas badly battered by Yolanda, Plaza added.