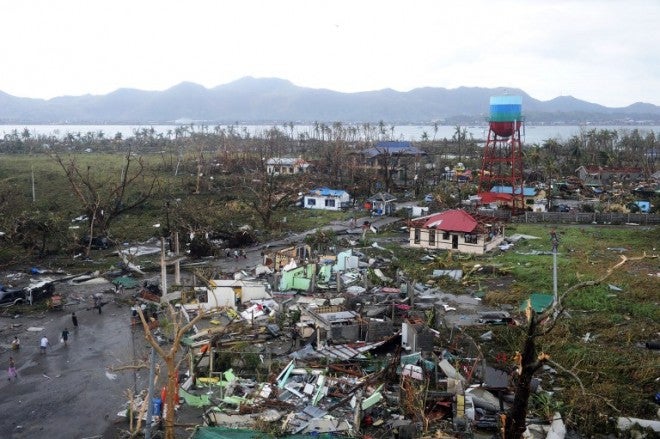 A general shot shows houses destroyed by the strong winds caused by typhoon Haiyan at Tacloban, eastern island of Leyte on November 9, 2013. AFP

MANILA, Philippines – The Commission on Elections (Comelec) is set to provide generators and batteries to the victims of monster typhoon Yolanda (international name Haiyan) in the worst-hit areas in Samar and Leyte.

“To aid the ongoing relief and rehab efforts in the Visayas, Comelec is releasing 700 generator sets and 80,000 standby batteries to the National Disaster Risk Reduction and Management Council (NDRRMC),” Comelec Chairman Sixto Brillantes Jr. said in a tweet Monday.

“These generators and batteries can be a temporary source of electricity in the affected areas until power lines are restored,” he said.

The 600 kilometer wide Yolanda, widely regarded as the strongest typhoon in recorded history, rampaged across provinces in the Visayas Region November 8 destroying houses, hospitals, government buildings, airports with its more than 250 kilometer per hour winds.

Communication and power lines were brought down causing power outages in many towns in the path of the typhoon. Roads were likewise blocked due to debris.

The death toll has already risen to 250 Monday with thousands more feared dead, according to the report of the NDRRMC.

The international community including the United States of America, United Kingdom, Australia, New Zealand, Israel, and Singapore, have stated their support to provide vital aid for the hardest hit provinces. International aid organizations are also scrambling to get aid into the country as soon as possible.