“Ma, just let go. Save yourself,” said the girl, whose body was pierced by wooden splinters from houses crushed by Supertyphoon “Yolanda.”

“I was holding her and I kept telling her to hang on, that I was going to bring her up. But she just gave up,” said Tenegra, her face contorted in grief.

The sun was shining only hours after the deadly landfall of the monster typhoon, casting a clearer light on the misery that had descended upon the city on Friday and the Tenegra home on the bank of a river.

Yolanda cut through Tacloban like a scythe, sending walls of water across the downtown area in a furious rush, toppling power lines and felling houses, wrecking trucks and cars totally and, in many many cases, ending lives.

Dozens of corpses turned up under piles of rubble. Some bodies lined the roadside, covered in blankets, staining the pavement with bright red blood.

People with missing relatives tentatively approached each one, peeking at the faces. One tearful man shook his head, muttering, “Not him.” Two teenage boys openly wept when they found what they were looking for: the body of their dead father.

The Tenegra family had huddled together in their shanty at Barangay (village) 66-Paseo de Legazpi, believing it could weather the storm as it had always done in the past.

But as the water rose with astonishing speed, the house toppled over, sweeping away the occupants, including Tenegra’s husband and her other daughter. They were able to scramble to safety, but the youngest Tenegra was spun around by the current along with the deadly debris.

“I crawled over to her, and I tried to pull her up. But she was too weak. It seemed she had already given up,” the mother said. 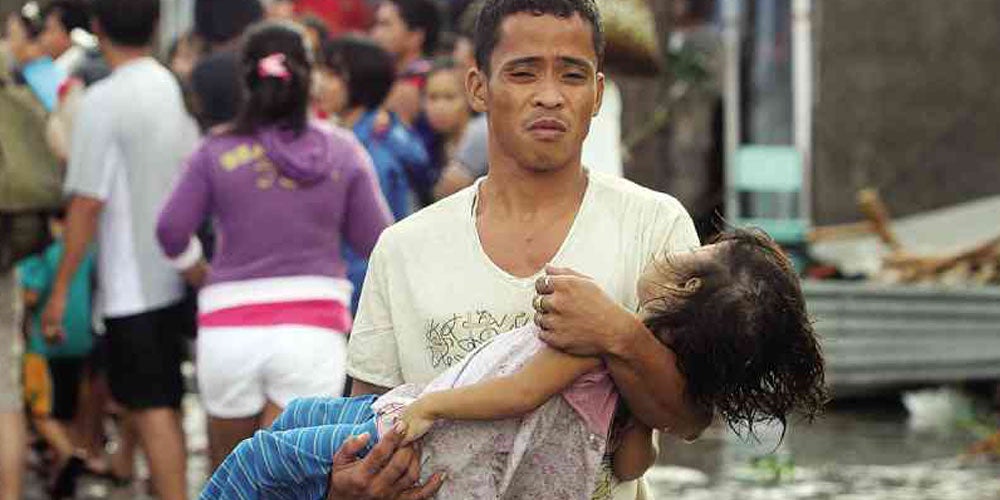 SO YOUNG. A man brings his lifeless 6-year-old daughter to the morgue at the downtown area in Tacloban City, one of the fatalities in the storm surge whipped up by Supertyphoon “Yolanda.” NIÑO JESUS ORBETA

Mute shock was etched on the faces of survivors, many of whom were unfamiliar with storms as fierce as this one.

Richard Bilisario, an Air Force man, was carried by violent waves that demolished his unit’s barracks at the military base overlooking the Leyte Gulf.

“At first, the wind was only coming from inland, so we didn’t really mind it. Then suddenly we heard the howling from the sea,” he recalled.

“When we opened the door to check, the water was already up to the knee. And as soon as the door was opened, the water just rushed in, and the 11 of us were thrown away,” he said.

Four are still missing, including their commander, Bilisario said.

At downtown Tacloban, two men silently pushed a wooden cart carrying the bloated bodies of a woman, her teenage son and her baby on the flooded main avenue.

The men took their gruesome load through the streets, as kibitzers watched in morbid fascination.

The woman’s name was Erlinda Mingig, 48, a fish vendor. She had been trapped in her one-story home with her two children, John Mark, 12, and 1-year-old Jenelyn, at Barangay 39-Calvaryhill.

“I told them to stay in the house because it was safer,” said Mingig’s husband, Rogelio, 48.

But the water was rising dangerously fast. When Erlinda tried to open the door to escape, it would not budge,” the man said.

“We found her embracing the children in one arm and grabbing on to the ceiling with the other,” he said.

Some of the bereaved expressed conflicted feelings of guilt: Why they survived, and why their loved ones didn’t. And in at least one case, why they had been able to save others, but not their own.

Reinfredo Celis, chair of Barangay 31-Pampango, spent most of Thursday and early Friday morning transporting his neighbors to a sturdy school building downtown, on his multipurpose cab.

But he didn’t even consider evacuating his own wife, believing they were safe in their concrete two-story house. He was mistaken.

Businessman Lemuel Honor, a former vice mayor of a Southern Leyte town, said Tacloban had been swamped by two different bodies of water.

“Two seas actually met over Tacloban: the Cancabato Bay and the Tacloban Bay,” he said.

The first wave of the calamity came when Yolanda barreled inland from the Pacific Ocean via the Tacloban Bay, and the second, when its tail pulled in waves from the Cancabato Bay in the opposite direction, he said.

“This is why you’d be confused why there were waves coming from both directions, first westward, then eastward,” Honor said.