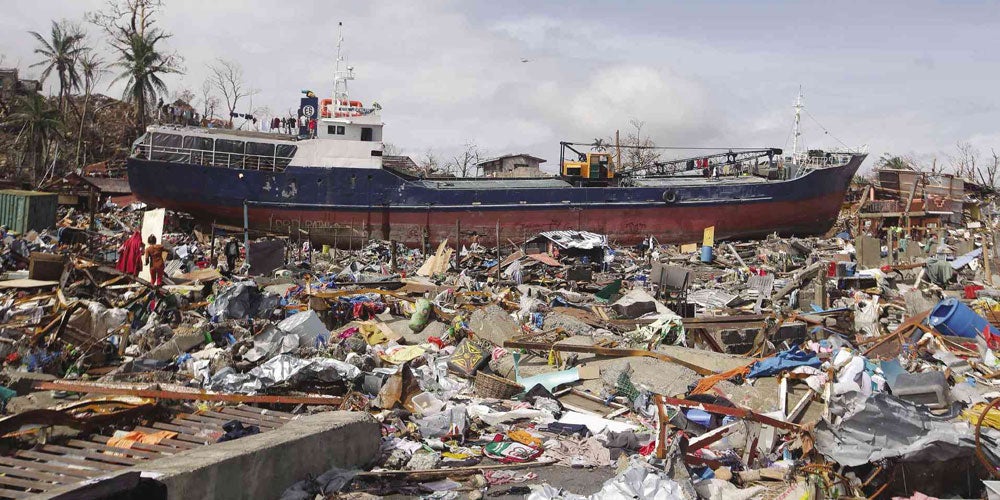 HARD LANDING A large boat sits on top of destroyed homes after it was washed ashore by strong waves caused by Supertyphoon “Yolanda” in Tacloban City. AP

“Tacloban is totally destroyed,” public school teacher Andrew Pomeda said of the damage inflicted on his city by Supertyphoon “Yolanda,” which swept through Visayas on Friday in what could be the worst disaster to hit the Philippines.

Three days after one of the worst storms on record swept through the central Philippines, decimating entire towns with tsunami-like surges and monster winds, Pomeda’s devastated Tacloban City had become a no-man’s-land.

“People are becoming violent. They are looting business establishments, the malls, just to find food,” Pomeda, 36, said. “I’m afraid that in one week, people will be killing from hunger.”

Authorities appealed for calm as they tried to understand the extent of the devastation that Yolanda (international name: Haiyan) wrought on Tacloban, where early, unconfirmed estimates put the death toll at 10,000, a sharp increase from the Philippine Red Cross estimate of 1,200 on Saturday.

Should the death toll exceed 10,000 as some officials estimated, the supertyphoon could well be the worst disaster to hit the country.

Like much of the Visayas, Leyte remained cut off from communications, leaving government workers carrying relief struggling to reach coastal villages, where the death toll remained unknown.

“People are walking like zombies looking for food,” said Jenny Chu, a medical student in Leyte. “It’s like a movie.”

And as in the movies, survivors ransacked banks’ automated teller machines, confirming a general breakdown in law and order.

On Friday morning, people swarmed on the 578 Emporium convenience store on the main avenue that was guarded by the owner.

“You cannot come in,” the owner warned the crowd.

“If you don’t allow us to come in, we will use force,” one man replied.

Then the men started counting, “One, two, three… .”

Before long a line formed in front of the store, and people came out carrying crates of household goods, groceries and bottled water.

The looting spread to other places, including branches of fast-food chains and shopping centers, among them the Gaisano Central on Justice Romualdez Street, and Robinson’s Place in Marasbaras district.

Richard Bilisario, an Air Force soldier, was surveying the damage when he saw the looting of Robinson’s Place. He was appalled.

“Under the circumstances, I would say looting for food and water is justifiable. But if you are taking a huge TV on your Pajero, that’s different,” said Bilisario, who survived a 3-meter storm surge that swept through the Air Force barracks overlooking Leyte Gulf.

“The man only smiled,” he said. “I said, ‘Go on.’ Next week this storm will happen again,” Bilisario said, shaking his head.

Speaking to reporters at Tacloban airport after surveying the damage in the city, Aquino acknowledged a “breakdown, especially in the local government level.”

“They are [the] necessary first responders, and too many of them were also affected [and could] not report for work,” the President said.

He said the national government had to step in and take over temporarily, putting in law enforcers and other people to fill positions that had suddenly become vacant because of the disaster.

The President said the government had thought of declaring a state of emergency or martial law when looting in Tacloban was reported.

Instead, the national government decided to take over, with the Department of the Interior and Local Government overseeing operations until all local government employees could return to work, he said.

The President left a national disaster council meeting briefly after a resident bombarded him with complaints.

The resident, a businessman, told Aquino that people were being “slaughtered downtown because of the looting.”

“Slaughtered? Slaughtered by… ?” the President asked.

“Someone shot at me downtown,” the businessman’s companion said.

“You are alive, so you are not slaughtered,” Aquino said.

The man appealed to Aquino to put Leyte under martial law.

The President said the government was already studying the declaration of a state of emergency, but later told reporters that crack troops would be sent to Tacloban as “show of state force to stop the looting.”

“They will be part of the peacekeeping force [there],” Sindac told reporters in Manila.

“The PNP is calling on the survivors to try to keep calm, be strong and patient. Help is on the way,” Sindac said.

PNP Director General Alan Purisima and senior government officials flew to Tacloban City on Sunday on a C-130 military cargo plane to see to the deployment of the special forces there.

Lt. Col. Ramon Zagala, chief of the military’s public affairs office, said 100 soldiers were ordered to Tacloban to beef up the military personnel who were already there and in surrounding towns.

“As we firmly establish command and control in affected areas, we appeal to the public to be patient. We understand your emotion and frustration due to the lack of information coming out,” Zagala said in a statement.

An Waray Rep. Neil Montejo felt more back-up forces were needed to restore order in Tacloban, and proposed that additional troops be sent to the city, according to House Speaker Feliciano Belmonte.

Belmonte said he would meet House leaders Monday for a discussion of ways to help in the relief and rehabilitation effort.

The scenes in Tacloban, a city of 220,000 people, and other coastal towns were reminiscent of a tsunami aftermath, with concrete slabs the only part of many homes remaining, vehicles flipped over and power lines destroyed.

“This is destruction on a massive scale. There are cars thrown like tumbleweed and the streets are strewn with debris,” Sebastian Rhodes Stampa, the head of a United Nations disaster assessment coordination team, said in Tacloban.

“The last time I saw something of this scale was in the aftermath of the Indian Ocean tsunami,” he said, referring to the 2004 disaster that claimed about 220,000 lives.

Yolanda hit Leyte and the neighboring island province of Samar with maximum sustained winds of 215 kilometers per hour and gusts of up to 250 kph early on Friday, generating storm surges of up to 3 meters high that roared deep inland.

The Eastern Visayas police chief, Chief Supt. Elmer Soria, said he was briefed by Leyte Gov. Dominic Petilla late Saturday and told there were about 10,000 deaths in the province, mostly by drowning and collapsed buildings.

Petilla’s figure was based on reports from village officials in areas where Yolanda slammed Friday.

But the National Disaster Risk Reduction and Management Council (NDRRMC), 900 km away in military headquarters in Quezon City, could not confirm that figure, and could not give a count of its own.

“We’re really having difficulty contacting local disaster risk reduction and management offices. We don’t know the real situation in the areas where we don’t have a line of communication,” said Maj. Rey Balido, spokesman for the NDRRMC.

It said 57 people had been reported missing.

Leo Dacaynos of the Samar provincial disaster council said Sunday that 300 people were confirmed dead in Basey town and another 2,000 were missing.

Some of the power lines knocked down by Yolanda were repaired and returned to service on Saturday, including those in the provinces of Batangas, Laguna, Bohol, Cebu and the islands of Negros and Panay, according to the National Grid Corp. of the Philippines (NGCP).

Transmission lines in Leyte and Samar were being inspected by company crews, the NGCP said.

As the government appeared to be focusing its attention on Tacloban, officials from other parts of the Visayas hit hard by the typhoon appealed for national help on Sunday.

Espina said the people in his district needed tents, food and medicines.

He said at least five people were killed in Biliran during the typhoon.

In Estancia town, Iloilo province, Western Visayas, 56 bodies were recovered from the sea on Sunday, according to municipal budget officer Erol Acosta.

In Cebu, officials reported 40 people killed in the northern part of the province.

They said 80 to 85 percent of houses and buildings and public infrastructure, especially on Bantayan Island, were destroyed by the typhoon.

Negros Occidental has declared a state of calamity, with many areas in the northern part of the province devastated and thousands of homes destroyed, Gov. Alfredo Marañon said on Sunday.