TACLOBAN CITY, Philippines—Tormented survivors of a typhoon that is feared to have killed more than 10,000 in the Philippines rummaged for food Sunday through debris scattered with corpses, while frenzied mobs looted aid convoys.

Two days after one of the most powerful storms ever recorded flattened entire towns across part of the Southeast Asian archipelago, desperate survival tactics created fresh horrors.

On the outskirts of Tacloban, a coastal eastern city of 220,000 where tsunami-like waves destroyed many buildings, Edward Gualberto accidentally stepped on bodies as he raided the wreckage of a home.

Wearing nothing but a pair of red basketball trousers, the father of four and village councilor apologized for his shabby appearance and for stealing from the dead.

“I am a decent person. But if you have not eaten in three days, you do shameful things to survive,” Gualberto told AFP as he dug canned goods from the debris and flies swarmed over the bodies.

“We have no food, we need water and other things to survive.”

After half a day’s work, he had filled a bag with an assortment of essentials including packs of spaghetti, cans of beer, detergent, soap, canned goods, biscuits and candies.

“This typhoon has stripped us of our dignity… but I still have my family and I am thankful for that.” 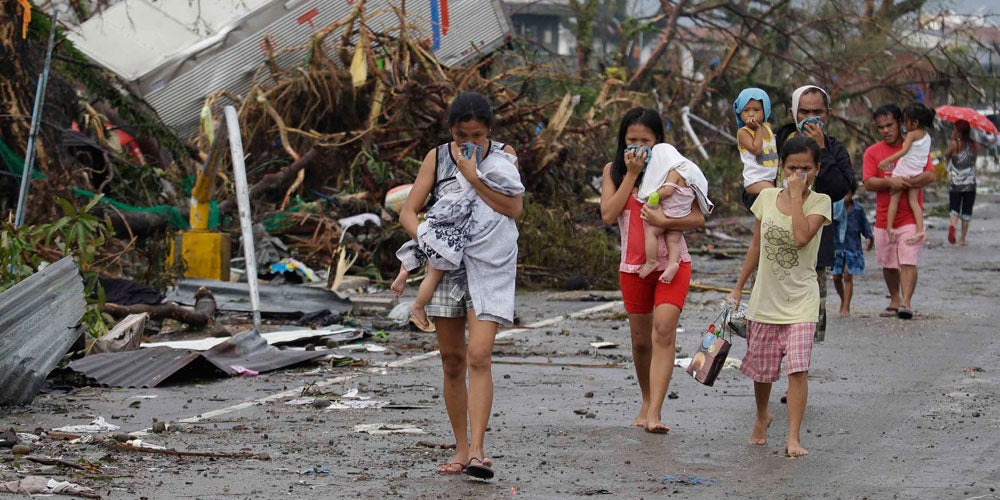 Residents cover their nose from the smell of dead bodies in Tacloban City on Sunday, Nov. 10, 2013. Tormented survivors of a typhoon that is feared to have killed more than 10,000 in the Philippines rummaged for food Sunday through debris scattered with corpses, while frenzied mobs looted aid convoys. AP PHOTO/BULLIT MARQUEZ

Elsewhere in Tacloban, other survivors were employing more aggressive means as they took advantage of a security vacuum created when most of the city’s police force failed to turn up for work after the typhoon.

Like Gualberto, many said they had not eaten since the typhoon and overwhelmed authorities admitted they were unable to get enough relief supplies into the city.

Some broke through shops that had withstood the typhoon by hammering through glass windows and winching open steel barricades.

One desperate meat shop owner brandished a handgun in a failed bid to prevent one mob from entering his shop.

He was ignored and the shop was ransacked. The businessman just silently stood by, waving his gun in the air and shouting. When he realized he had lost the fight, he cursed them and walked away.

“There is no security personnel, relief goods are too slow to arrive. People are dirty, hungry and thirsty. A few more days and they will begin to kill each other,” she said.

“This is shameful. We have been hit by a catastrophe and now our businesses are gone. Looted. I can understand if they take our food and water, they can have it. But TV sets? Washing machines?”

Philippine Red Cross chairman Richard Gordon described some of the looters as “mobsters,” after one of his organization’s convoys was ransacked near Tacloban.

Meanwhile, confused men, women and children walked aimlessly along roads strewn with overturned cars and felled power lines, some gagging from the stench of rotting flesh.

A team of military cadaver collectors had been deployed, but the soldiers appeared overwhelmed.

“There are six trucks going around the city picking up the dead, but it’s not enough,” said the driver of one of the vehicles as it wended its way through the streets.

“There are bodies everywhere, we do not have enough people to get to them.”

Some survivors handed out small letters to passers-by and reporters asking them to contact their relatives to relay their fate.

Many had wounds on their faces and were limping, while all had stories of unimaginable horror.

“The huge waves came again and again, flushing us out on the street and washing away our homes,” Mirasol Saoyi, 27, told AFP near the city’s seaside sports stadium that withstood the typhoon and where thousands of people had gathered.

“My husband tied us together, but still we got separated among the debris. I saw many people drowning, screaming and going under… I haven’t found my husband.”—Jason Gutierrez