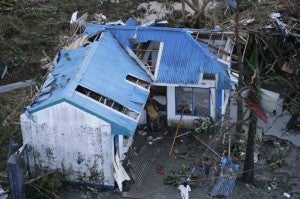 MANILA, Philippines- Super typhoon “Yolanda” (Haiyan) may go down in history as the deadliest natural disaster to hit the calamity-prone Philippines, with authorities estimating at least 10,000 dead on one island alone.

Haiyan made landfall in the eastern island of Samar on Friday and then cut through the central islands, causing storm surges, strong winds and heavy rain that flattened buildings, toppled trees and electrical poles and washed away houses and cars.

The provincial police chief in Leyte, one of the hardest-hit islands, estimated that 10,000 had died there. In Samar, a disaster management official said 300 had died in one town alone with 2,000 still missing.

The death toll from Haiyan is still rising as many areas remain isolated after the storm knocked out power and communications and left many roads and bridges impassable.

Such disasters are all too frequent in the Philippines, which is located along a typhoon belt and the so-called Ring of Fire, a vast Pacific Ocean region where many of Earth’s earthquakes and volcanic eruptions occur.

Other typhoons also dominate the current list of the 10 deadliest natural disasters on record in the Philippines, based on government or United Nations figures: 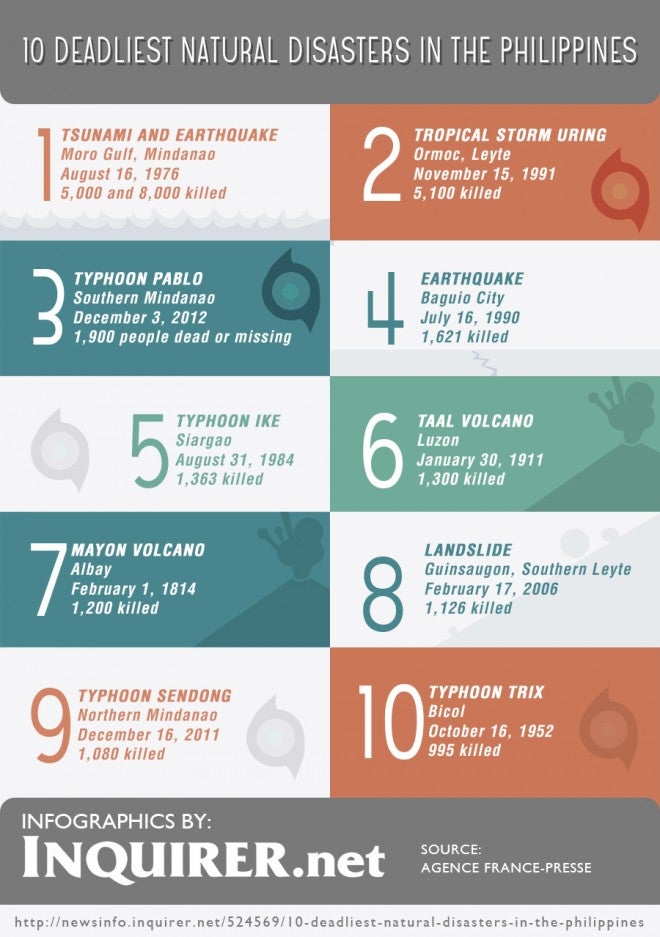 2. Tropical Storm Thelma unleashes flash floods on the central city of Ormoc on Leyte island on November 15, 1991, killing more than 5,100.

3. Typhoon Bopha smashes into the main southern island of Mindanao on December 3, 2012. Rarely hit by cyclones, the region suffers about 1,900 people dead or missing.

4. A 7.8 magnitude earthquake strikes the mountain resort of Baguio city and other areas of the northern Philippines on July 16, 1990, killing 1,621 people.

7. Mayon volcano in the far east of the country erupts on February 1, 1814, burying the nearby town of Cagsawa with ash and rock and killing about 1,200 people.

8. An entire mountainside collapses on the village of Guinsaugon on the central island of Leyte on February 17, 2006, killing 1,126.

10. Floods and landslides unleashed by Typhoon Trix kill 995 people in the Bicol region of the main island of Luzon on October 16, 1952.