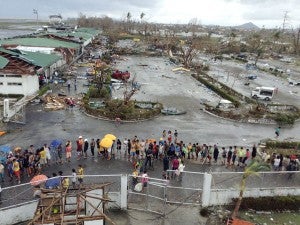 HANOI – More than 600,000 people were evacuated as super typhoon Haiyan veered towards Vietnam, authorities said Sunday, after the storm smashed through the Philippines killing thousands and causing widespread devastation.

“We have evacuated more than 174,000 households, which is equivalent to more than 600,000 people,” an official report by Vietnam’s flood and storm control department said Sunday.

The storm is expected to strike on Monday morning after changing course prompting mass evacuations in northern Nghe An province around 230 kilometers (145 miles) from the capital Hanoi, the update said.

However, many of the estimated 200,000 evacuated in four central provinces on Saturday have been allowed to return to their homes.

Haiyan “is quickly moving north and northwest, traveling at a speed of up to 35 kilometers per hour,” the country’s weather bureau added in a statement.

The weather system – one of the most intense typhoons on record when it tore into the Philippines – has weakened over the South China Sea and is expected to hit as a weaker category 1 storm, meteorologists added.

The typhoon’s epicenter is expected to make landfall around 7:00 am Monday (1200 GMT), with winds of around 74 kilometers (45 miles an hour) per hour.

National flag carrier Vietnam Airlines said it had canceled some 62 flights to and from the country’s central provinces due to bad weather.

At least four people were reportedly killed while preparing to escape the typhoon, disaster officials said, without giving further details.

Haiyan struck the Philippines Friday with sustained winds of around 315 kilometers (195 miles) an hour, causing massive storm surges and cutting through entire towns.

The monster typhoon is believed to have killed more than 10,000 people in the Philippines and devastated vast areas of Tacloban, the capital of Leyte province, authorities there said.

It has also claimed the lives of 300 people and almost 2,000 other missing on the island of Samar.

Central Vietnam has recently been hit by two other typhoons – Wutip and Nari, both category one storms – which flooded roads, damaged sea dykes and tore the roofs off hundreds of thousands of houses.

Read Next
‘Yolanda’ kills 300 in Samar – official
EDITORS' PICK
Climate Change Commission and Nestlé PH to discover sustainability-focused solutions
Isko Moreno bares ‘two-pronged’ approach to rehabilitate MSMEs
What’s at stake for every fighter at ONE: NextGen
‘Flattered’ Pacquiao to push through with presidential bid after being eyed as VP
Gordon calls 2 Pharmally execs ‘Senate fugitives’ after no-show in probe
Legarda emphasizes role of ICC/IPs in nation building this IP month
MOST READ
Drivers with no traffic violations can now renew licenses for 10 years
Yang’s Princeton degree raises eyebrows among senators
Gordon to Duterte: You? Teaching me courtesy?
LJ Reyes says Paolo Contis made ‘no efforts’ to talk to her after their split
Don't miss out on the latest news and information.