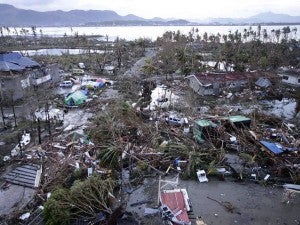 MANILA, Philippines — Monster typhoon “Yolanda” (international name Haiyan) claimed a total of P138.6 million worth of crops being grown in the Bicol and Mimaropa regions, according to preliminary data from the Department of Agriculture.

Monitoring by the DA’s field units show that as of Nov. 9, Yolanda wasted a total of 9,857 metric tons (MT) of rice, corn and high-value crops in some 5,500 hectares of farmland.

Of total damage to crops, about 90 percent accounted for 8,817 MT of palay worth P124.1 million. The Bicol region alone lost a total of some P89.2 million worth of palay.

In the Mimaropa region, Yolanda took P34 million worth of palay from Occidental Mindoro and P893,000 from Oriental Mindoro.

Also, the super typhoon destroyed a total of P9.3 million or 435 MT of high-value crops in Masbate, Camarines Sur, and Oriental Mindoro.

Last Friday when Yolanda was just approaching land, Agriculture Secretary Proceso J. Alcala said the DA has prepared palay seeds for replanting, which would be made available to farms that would sustain total damage.

The DA still has 300,000 MT in buffer seed stock, out of the 600,000 MT it has earmarked in preparation for expected agricultural damage in times of calamities.

The government’s yearly buffer stock of palay seeds is adequate for planting 400,000 hectares of rice land, which is a tenth of the estimated 4 million hectares planted to rice.