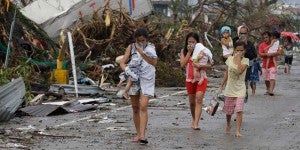 Residents cover their nose from the smell of dead bodies in Tacloban City on Sunday, Nov. 10, 2013. Tormented survivors of a typhoon that is feared to have killed more than 10,000 in the Philippines rummaged for food Sunday through debris scattered with corpses, while frenzied mobs looted aid convoys. AP

TACLOBAN, Philippines – Philippines rescue workers struggled to bring aid to famished and destitute survivors Monday after a super typhoon that may have killed more than 10,000 people, in what is feared to be the country’s worst natural disaster.

Relief teams appeared overwhelmed in their efforts to help those whose homes and livelihoods were destroyed by “Yolanda” (international name: Haiyan), which sent tsunami-like waves and merciless winds rampaging across large swathes of the archipelago Friday.

In Vietnam, more than 600,000 people were evacuated as Haiyan, which moved out of the Philippines and into the South China Sea on Saturday, made landfall there early Monday morning.

Hundreds of Filipino police and soldiers were deployed to contain looters in Tacloban, the devastated provincial capital of Leyte, with gangs stealing consumer goods such as televisions.

A long snake-like queue formed in Tacloban’s flattened airport as tired and hungry survivors, some who had trudged through mud and debris for several kilometres, sought the basic essentials for survival.

“We want water and medicines for the injured. So if you can organise it, please, for us, don’t let anybody come here who will just watch us and see us suffer, because we don’t want that,” Joan Lumbre Wilson told AFP, adding that authorities were struggling to cope with the sheer numbers seeking help.

“They’re trying to drive us away again, back to our places, where it’s too far, and then do it again tomorrow (walk to reach the compound), and it’s not fair on us,” she said.

The depression is expected to hit land on the southern island of Mindanao late Tuesday and then move across the central islands of Bohol, Cebu, Negros and Panay, which all suffered typhoon damage, forecaster Connie Dadivas said.

US meteorologists said Haiyan made landfall in Vietnam early Monday.

The US Joint Typhoon Warning Center (JTWC) said in an update at 2100 GMT the storm “is currently making landfall” approximately 97 miles (156 kilometres) east south-east of the capital Hanoi, with sustained winds of 75 miles (120 kilometres) per hour.

The typhoon had lost force at sea, striking Vietnam as the equivalent of a category-one hurricane –the weakest on the one-to-five Saffir-Simpson wind-speed scale.

It hit the Philippines as a category five storm with maximum sustained winds of 315 kilometers (195 miles) an hour – one of the most powerful ever recorded.

Despite the typhoon’s weakened state, more than 600,000 people were evacuated in Vietnam, with flooding and heavy rain expected.

The Vietnamese government website said Sunday that five people had died while preparing for the storm.

Farther north, six members of a cargo boat were also missing off the Chinese province of Hainan, state media in China reported.

Up to four million children could be affected by the disaster in the Philippines, the United Nations Children’s Fund warned.

“We are rushing to get critical supplies to children who are bearing the brunt of this crisis,” said UNICEF Philippines representative Tomoo Hozumi.

“Reaching the worst-affected areas is very difficult,” he said. “But we are working around the clock.”

Authorities were struggling to calculate the sheer magnitude of the disaster, with the regional police chief for Leyte saying initial estimates showed 10,000 people were believed to have died in that province alone.

Chief Superintendent Elmer Soria told reporters in Tacloban that the typhoon destroyed up to 80 percent of the structures in its path.

On the neighbouring island of Samar, a local disaster chief said 300 people were killed in the small town of Basey. He added another 2,000 were missing there and elsewhere on Samar, which was one of the first areas hit when Haiyan swept in from the Pacific.

Dozens more people were confirmed killed in other flattened towns and cities across a 600-kilometre stretch of islands through the central Philippines.

As the scale of the disaster began to emerge, an international aid effort ratcheted up with the United States, UN, European Commission and Britain among those pledging help.

Given its location along a typhoon belt and the so-called Ring of Fire, a Pacific zone of tectonic activity, the Philippines endures a seemingly never-ending pattern of deadly typhoons, earthquakes, volcano eruptions and other natural disasters.

But if the death toll of more than 10,000 is correct, “Yolanda” would be the deadliest natural disaster ever recorded in the country, worse than the 1976 Moro Gulf tsunami that killed between 5,000 and 8,000 people.