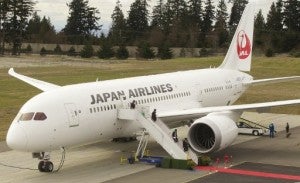 TOKYO – Japan Airlines said Monday it has reported to Boeing a possible glitch in the battery system on the 787 Dreamliner, after pilots saw an indicator warning light en route from Finland.

The alert was the latest in a growing line of problems that has beset the next-generation plane, including a months-long grounding earlier this year.

JAL said instruments warned pilots there was a problem with the battery connected to the plane’s auxiliary power unit on the flight from Helsinki to Tokyo on Friday.

Engine monitoring systems showed the voltage and electrical current were within normal ranges and the plane arrived at Helsinki without delay, a JAL spokesman said.

“After its arrival we changed the auxiliary battery and charger, and the plane is now back in normal operation,” he said.

JAL and chief rival All Nippon Airways (ANA), the single biggest operator of 787s, were among airlines hit by the worldwide grounding of Boeing’s lightweight plane following problems with the lithium-ion batteries, including a fire.

Boeing admitted in April that despite months of testing it did not know the root cause of the problems, but rolled out modifications it said would ensure the issue did not recur.

The measures comprised redesigning the battery and charger system and adding a steel box to prevent burning.

Since then, Dreamliners have experienced a series of minor glitches, including a fault with an air pressure sensor and the brake system.

In October, unflushable toilets caused JAL pilots to turn their plane around just after it left Moscow bound for Tokyo.

Read Next
ARMM to send aid to Visayas provinces wrecked by ‘Yolanda’
EDITORS' PICK
PH study shows 1 in 4 COVID patients at risk for stroke
Print media group seeks tax breaks
Legarda emphasizes role of ICC/IPs in nation building this IP month
Work-From-Home is here to stay and requires reliable logistics
SC asked to compel gov’t action vs plastic pollution
Climate Change Commission and Nestlé PH to discover sustainability-focused solutions
MOST READ
Drivers now required to take driver’s education upon license renewal – LTO
Gordon to Duterte: You? Teaching me courtesy?
Can Marcos Jr. be disqualified?
Marcos Jr’s ‘special diploma’ from Oxford: You can have it, too
Don't miss out on the latest news and information.