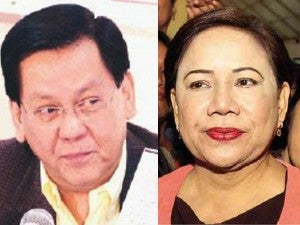 MANILA, Philippines –  Two more senators on Monday announced that they will not avail themselves of their Priority Development Assistance Fund (PDAF)  known as “pork barrel” funds in 2014, bringing the total number of senators who are abandoning the congressional discretionary fund next year to 11.

Senators Sergio Osmeña and Cynthia Villar, in separate letters last November 7,  both informed  the Senate committee on finance headed by Senator Francis  “Chiz” Escudero that  they were giving  up their “pork” next year.

Osmeña, in his letter to Escudero, said he was foregoing his congressional allocation for 2013 and 2014 amounting to P400 million.

Each senator is allotted P200-million every year, while congressmen receive P70-million each.

“In brief, I would like to state that I am resolutely proposing to deduct the aggregate amount of P200 million from the 2014 General Appropriations Bill perceived to be ‘pork barrel’ allocation to my office,” she said.

“Consistent with Senate Resolution No 202, which I filed on August 26, 2013, calling for the abolition of the PDAF for senators, I hereby request that House Bill No. 2630 (FY 2014 General Appropriations Bill) be amended by deleting my PDAF allocation in the amount of P200 million from the budgets of the relevant government agencies, and reducing the total amount of the proposed 2014 national budget by said amount of P200 million” Angara said in his letter to Escudero this Monday.

“I hope that the P200 million that will be saved from the 2014 national budget can be used to increase the education budget in the 2015 general appropriations bill,” he added.

Sotto, in his letter to Escudero last November 6, reiterated his position that “I am foregoing my PDAF allocation for the remaining years of my term as senator of the republic,” he said.

Senator Miriam Defensor-Santiago also wrote Escudero this Monday, saying she was “opposed to any ‘pork barrel’ in any manner, shape, form, or under any name.”

But instead of deducting the PDAF from the 2014 budget, Santiago proposed that the entire “pork” allocation amounting to about P25 billion be used for calamity and contingent funds.

She said she would not also waive her right to inquire into past disbursements of the PDAF and the DAP (Disbursement Acceleration Program).

“If some senators shall get more funds than others, I shall inquire what criteria are used, and if these criteria are constitutional,” Santiago added.

Senate Majority Leader Alan Cayetano also preferred that the entire “pork” of the senators amounting to P4.8 billion be realigned to the calamity fund “for the specific purpose of rehabilitation of areas beset by calamities in 2013.”

In his letter to Escudero dated November 11, Cayetano also urged the finance committee to clarify and explain to the public that the abolition of the pork barrel “is not as simple as removing the same from the budget.”

“I strongly believe that it is our duty to explain that what we must abolish is the system that gives individual legislators the discretion and authority over lump sum amounts but this does not mean that we will deprive our people of the much needed funds for programs and services especially those that will assist our people who have been ravaged by recent calamities and man-made disasters,” he said.

Meanwhile, Senator Antonio Trillanes IV said he would realign his PDAF to fund scholarship program in different colleges and states. Universities, medical assistance in government hospitals, and construction of barracks of soldiers and policemen.

“I could have opted to join the bandwagon of deleting the P200 million from the budget but this will be an afterthought and will not achieve anything aside from trying to look good in the media “Worse, it will show utter insensitivity to the needs of the poor and the marginalized sector ,” Trillanes said in a statement.

“Besides, public outrage is directed to those who stole from the public funds whereas, I have been transparent on where I allocated my previous PDAF, which posted on my website (www.trillanes.com.ph): and based on the monitoring and evaluation of my office, our countrymen have greatly benefited from it,” he added.

The senators have until this Monday to decide what to do with their pork barrel funds.