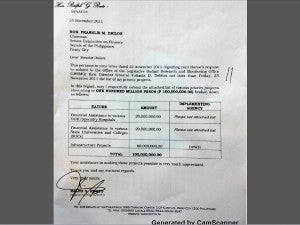 ‘FOR PRIORITY PROJECTS’ A sample letter dated November 24, 2011, obtained by the INQUIRER showing the request of an incumbent Senator for P100,000,000 funding from the office of Senator Franklin Drilon, then chairman of the Senate Committee on Finance. Six senators made the request. Click here for more.

Six administration senators were the recipients in 2011 of funds from supposed government savings released through the controversial Disbursement Acceleration Program (DAP), on top of their regular pork barrel entitlements of P200 million each year.

That year, Malacañang let it be known that some P6 billion in “savings” were being made available to legislators who were told they could nominate any project or projects of their choice, the Inquirer has learned. But it was up to the leaders of the House and the Senate to determine how the amount was to be divided.

The signed letters of the six senators—which were all addressed to Drilon, the then finance committee chair—indicated that the legislators were working on a tight deadline.

Recto wrote that he was submitting his list based on Drilon’s letter dated Nov. 22, 2011 requesting that he “submit to the Office of the Legislative Budget Research and Monitoring Office thru Director General Yolanda D. Doblon not later than Friday, Nov. 25, 2011 the list of my priority projects.”

Recto’s letter was dated Nov. 24, the eve of the Drilon deadline, and so were the lists submitted by Cayetano, Guingona, and Osmeña. Trillanes wrote on the same day that the senators were instructed by Drilon to submit their lists, while Pangilinan produced his letter the following day.

The six senators’ priority lists came a month after the Department of Budget and Management (DBM) announced the implementation of “P72.11 billion in additional projects,” funded through “savings” from 2010 and 2011.

Drilon said he could not remember if he had written to some senators asking them to identify P100 million worth of projects in November 2011, but saw nothing wrong in doing so, if he did.

“I do not remember that one but it’s possible that I did,” he said.

The disbursements were to be made through the DAP, a relatively new and little-known lump-sum item in the budget which it now appears the Aquino administration has been tapping as a source of funding for senators’ additional projects, over and above their Priority Development Assistance Fund (PDAF) entitlements.

It was not until Sen. Jinggoy Estrada—who had just been charged with plunder for his alleged involvement in the pork barrel scam allegedly orchestrated by Janet Lim-Napoles—disclosed in a privilege speech in late September that senators had been given additional pork of P50 million each in 2012 a few months after the then Chief Justice Renato Corona was convicted by the Senate impeachment court that Malacañang came clean about the DAP.

After allegations flew that the senators who voted to convict Corona had been bought off by Malacañang, Budget Secretary Florencio Abad admitted that 19 senators had indeed received additional sums, outside of their PDAF.

But he said the funds were not bribes but releases from the DAP which he said was a fund created in 2011 out of the supposed pooled “savings” of government agencies to be used to “ramp up spending after sluggish disbursements, resulting from the government’s preliminary efforts to plug fund leakages and seal policy loopholes within key implementing agencies, caused the country’s GDP growth to slow down to just 3.6 percent.”

Abad said 19 senators received a total of P1.107 billion in additional lump-sum funds, six months after Corona was convicted. The funds were released in several installments from October to December 2012, the allocation for each senator ranging from a low of P30 million to a high of P100 million.

The list of recipients was topped by Drilon who got P100 million, Sen. Francis Escudero, P99 million, and then Senate President Juan Ponce Enrile, P92 million.

The six senators’ letters came at about the same time that four of their colleagues—Senators Ramon “Bong” Revilla Jr., Jinggoy Estrada, Ferdinand “Bongbong” Marcos Jr., and Vicente Sotto III—had sought the release of P100 million for themselves.

But documents obtained by the Inquirer showed that Revilla, Estrada, Marcos Jr. and Sotto sought to “realign” the funds meant for projects to be implemented by the Department of Agrarian Reform to the National Livelihood Development Corp. The DBM issued “negative” Special Allotment Release Orders (Saro), meaning they got their wish.

Revilla, Estrada, Marcos and Sotto have all denied any wrongdoing, claiming that their signatures in the letters may have been faked.

In Cayetano’s case, the senator set aside a total of P22.5 million in “financial assistance to LGU (local government unit).” Another P44.5 million was allocated for public works projects in eight areas, mostly in Taguig City where his wife is the mayor.

In his letter, Recto allocated P60 million to “infrastructure projects” to be implemented by the Department of Public Works and Highways. The remaining P40 million was evenly divided between public specialty hospitals and state universities and colleges in the form “financial assistance.”

Trillanes set aside his P100 million purely for infrastructure projects, such as a “court cover” (P1.5 million) in Barangay Baretbet in Bagabag, Nueva Vizcaya, and a hanging bridge (P1 million) in Kalibo, Aklan.

Of Guingona’s own allocation, P10 million was set aside for the office of Social Welfare Secretary Dinky Soliman. The money was to be used for “augmentation and support services to intermediaries in their implementation of social and development programs, and activities for distressed and displaced individuals, families and communities…”

Asked about his project proposals worth P100 million, Osmeña said in a text message: “It could be that much but you must understand that I don’t pay much attention. In fact I have not used P200 million [PDAF] for 2013.”

Drilon said there was nothing irregular in asking senators to identify projects for funding, if he did do it.

“I do not remember that one but it’s possible that I did,” he said.

The funds were supposedly part of the executive branch’s disbursement acceleration program, he said in a phone interview.

“It is not unusual that senators would be asked to submit projects to be funded out of unspent appropriations so that our public spending program is met,” Drilon said.

Drilon said that he wasn’t aware of the existence of the controversial DAP at the time but accepted the DBM’s explanation that the purpose of the program was to start spending “appropriations which are not being spent.”

“Now what is wrong with appropriations not being spent? When the gross domestic product is computed, a good portion of that may be 20 percent [coming] from public spending and public spending is provided in the budget,” he said.

“What is important is that these funds are used for the infrastructure projects so requested by the senators. Of course if it is used for something else, something should be questioned,” he said.

Asked if the allocations given to senators’ projects in November 2011 were related to the impeachment of Corona at the House two weeks later, Drilon said: “That’s malicious.”

The six senators involved saw nothing irregular about getting the additional allocations in November 2011.

“It had nothing to do with impeachment. [Those were] regular releases,” Recto said.

Trillanes said he couldn’t remember if the projects were charged against the DAP or the PDAF.

“But one thing I’m sure of is, I allocated every single peso of it properly and none went to bogus NGOs (nongovernment organizations) or ghost projects,” he said, adding that his allocations were listed on his website.

Pangilinan said he also wasn’t aware of DAP in 2011.

“It was my understanding then that what we submitted as requested would be part of the regular PDAF allocations for the office,” he said.

Nothing to do with Corona

Reached in Washington D.C. where he was attending the World Bank and International Monetary Fund annual meetings, Abad said whatever additional support for projects of legislators was given in 2011 had nothing to do with the impeachment of Corona.

“The year 2011 was the period when the underspending was most serious. That was why the GDP growth fell to 3.6 percent. That was why we entertained requests for support for additional projects of national government agencies, government-owned and -controlled corporations, local government units and legislators,” he said.

He said the funds did not go directly to the senators.

“This was coursed through NGAs (national government agencies) and were mostly infrastructure projects given in different tranches starting mid-2011, or a year before the impeachment judgment in May 2012,” said Abad. With reports from Norman Bordadora and Michael Lim Ubac