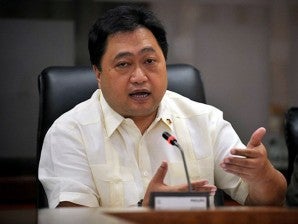 If the Malampaya Fund is “intact,” where’s the money?

Cabinet officials on Monday had a tough time explaining the status of the P136-billion balance of the proceeds of the government’s share in revenues from the gas project off Palawan province, part of President Aquino’s pork barrel funds, the use of which has been questioned in the Supreme Court as unconstitutional.

Briefing senators on the National Expenditure Program (NEP) for 2014, Treasurer Rosalia de Leon and Finance Secretary Cesar Purisima agreed that the balance was lodged in a special account in the general fund.

Both officials, however, admitted that there was “no cash” to speak of. But De Leon qualified that the fund was commingled in the general fund and that cash would always be available when needed.

Earlier in the day, during the hearing on the 2014 budget on the Department of Finance, Sen. Ralph Recto managed to elicit an answer from De Leon on the whereabouts of the Malampaya Fund.

“Don’t mislead the public and make them think there’s P137 billion available in cash by saying it’s intact,” said Recto, who chaired the hearing on the finance budget.

“There’s something wrong there. Tell the public what is the truth. That this is commingled with the general fund; that’s what it is,” he said.

De Leon replied: “We can use the cash … If there’s an expenditure to be funded, the cash will be made available.”

De Leon explained that the fund was intact “in the sense” that the Bureau of the Treasury was monitoring the disbursements out of the fund.

Asked if there was a separate item of the fund in the bank, De Leon said this was a special account in the general fund.

Recto later explained to reporters: “If they need to borrow money, they will make it available because that is what you call an appropriation balance. That’s all accounting. If we talk of proper cash management, it’s not a good practice. Even the secretary of finance said so.”

The constitutionality of the discretionary manner in which the President can use the government share in the operation of the Malampaya gas and oil fields is one of the twin issues to be decided by the Supreme Court next month, along with the congressional Priority Development Assistance Fund (PDAF).

Widespread public indignation over the channeling of PDAF into ghost projects and kickbacks has prompted three petitions to the high tribunal to declare lump sum allocations to lawmakers unconstitutional, along with the Malampaya Fund disbursements.

During the NEP hearing, Sen. Serge Osmeña III asked why the government had not spent the balance of the Malampaya Fund on projects. Purisima said: “The cash has been spent but there is no borrowing.”

Purisima explained that there was an “unusual account”—Account No. 151 created by Presidential Decree No. 1234—allowing the Malampaya Fund to be used by the government. He said the Aquino Cabinet tried to understand this when it took over in June 2010.

Then De Leon butted in: “There’s no more cash.”

Osmeña retorted, “You know you’re going to get us in trouble.”

De Leon and Purisima, together with other members of the Development Budget Coordination Committee (DBCC), briefed Osmeña on the NEP.

“Anytime we need to fund an energy-related project, you will always have appropriation to fund that project,” he told Osmeña. “In case of balance, what you have is available appropriation. If we need appropriation, we provide it with cash.”

“The P130-billion balance is really P130 billion of appropriations that is available,” he added.

According to the Treasury headed by De Leon, the government had collected P183.57 billion for the Malampaya Fund from 2002 to Oct. 9 this year. The balance stands at P136 billion.

Presidential Decree No. 910 of the late dictator Ferdinand Marcos provides that royalties and proceeds from the exploitation of energy resources should form part of a special fund to finance energy development projects of the government.

However, it also authorizes the use of the fund for other projects approved by the President without seeking legislative sanction. Critics said that this undermined the constitutional mandate to the legislature of its power of the purse.

Purisima blamed PD 1234 for the confusion on the nature of the Malampaya Fund.

“It authorizes double accounting. It says it’s a revenue every year from 2002 and yet, on the other hand, it has a ledger that says there’s a number that represents authorized appropriation that can be used in accordance with the law,” he told Osmeña.

Earlier in the day, Purisima explained to Recto that Account No. 151 under PD 1234 allowed the Malampaya Fund to “straddle between a special fund and a general fund.”

Purisima agreed with Osmeña and Recto that the martial-law era decree should be amended to include the fund in the General Appropriations Act, or the national budget.

A couple of weeks ago, Recto commented that the fund could not be accounted for. Treasury officials later said this was “perfectly intact.”

Under the Aquino administration, it also said, releases against the Malampaya Fund, amounting to P18.45 billion, were all for energy-related projects.

Sen. Miriam Defensor-Santiago has filed a resolution expressing the sense of the Senate that the President submit all off-budget items, including the Malampaya Fund, to Congress’ scrutiny every year.

Santiago said money from the Malampaya Fund, Philippine Charity Sweepstakes Office and Philippine Amusement and Gaming Corp. should be included in the Budget of Expenditures and Sources of Financing (BESF).

Santiago said these off-budget funds violated the constitutional provision that states: “No money shall be paid out of the treasury, except in pursuance of an appropriation made by law.”

She said these funds were created during martial law and excluded from the national treasury in violation of the “one-fund” concept, which she said is a “sound concept.”

“At present, these off-budget funds are under the complete control of the President, without an appropriation made by Congress. The practice of off-budget funds is an evil that should be struck down on its face for violating the Constitution,” Santiago said.

While the President submits the BESF report and the NEP to Congress, it’s the latter that has the sole power to appropriate the revenues earned by government, the senator said.

“The BESF report contains the sources of government revenues and their corresponding amounts, and a proposal on how these funds shall be spent for the next fiscal year,” Santiago said.

While it’s supposed to contain all the sources of government revenues, in reality, the BESF Report does not include the off-budget sources of revenues. “These three major sources of national revenues are used, distributed, and disbursed outside the budget process,” she said.