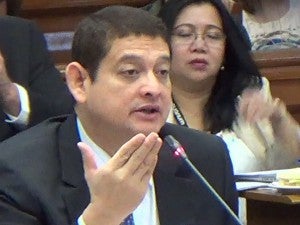 MANILA, Philippines –  The  Senate  may  not  cite  Janet Lim-Napoles in contempt  when she testifies at the Senate and  invokes her right  against self-incrimination, Senator  Teofisto Guingona  III said on  Tuesday.

But   Guingona said  the  right against self-incrimination  may only  be invoked on questions that  would really incriminate Napoles.

“Everytime you ask a question she can invoke  her right but it has to be something that will incriminate her. (It’s)  can’t be like what’s your name…” he said.

And while  Napoles’ camp may request for an executive session, Guingona  said he  would not agree to it “because that’s precisely the point no, para malaman ang katotohanan, para malaman kung ano ang nangyari (to find out the truth, to find out what happened) .”

Napoles, who has been detained for  serious illegal detention of her cousin and whistle-blower  Benhur Luy,  was summoned by the Senate to appear and testify on  November  7  on the “pork barrel” scam  that she allegedly  masterminded.

A plunder complaint was also filed against her at the  Office of the Ombudsman, along with other  individuals  allegedly involved  in the scam.

Napoles to face accusers on Nov. 7