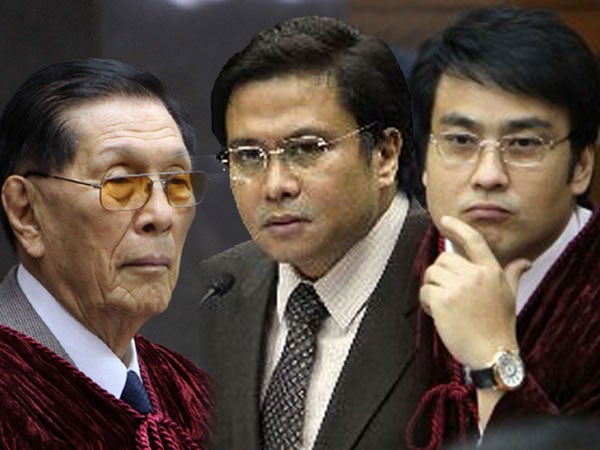 MANILA, Philippines – The Department of Justice (DOJ) asked for the cancellation of passports of Senators Juan Ponce Enrile, Jose “Jinggoy” Estrada and Ramon “Bong” Revilla Jr. and others tagged in the “pork barrel scam,” Radyo Inquirer 990AM said Thursday.

But Reyes had already left the country last August 31, after her name was dragged into P10-billion pork barrel scam, allegedly masterminded by Janet Lim-Napoles.

Enrile, Estrada, Revilla, Reyes and Napoles were all charged with plunder at the Office of the Ombudsman for the alleged misuse of the Priority Development Assistance Fund (PDAF), known as “pork barrel.”

The three senators were accused of receiving kickbacks through conduit non-government organizations headed by Napoles.

In her letter to DFA undersecretary for administration Rafael Seguis, Justice Secretary Leila De Lima cited “sufficient basis in fact and law to cancel the passports of the subject persons in the interest of national security.”

She also cited Section 4 of Republic Act No. 8239 or the Philippine Passport Act of 1996, which stated that “in the interest of national security, pubic safety and public health, the Secretary or any of the authorized consular officers may, after due hearing and in their proper discretion, refuse to issue a passport, or restrict its use or withdraw or cancel a passport.”

Article V, Section 1 of the implementing rules and regulations of RA 8239 states that in case of passport cancellation, the holder, either personally or through counsel, shall be afforded the opportunity to be heard.

The government, in its 2010-1026 National Security Policy, considers graft and corruption as a national security policy, according to De Lima,  “because it saps public resources, undermines the morale of the civil service and affects the delivery of basic services.”

Graft and corruption also “breeds sociopolitical instability as scandals degenerates into crisis situations that undermine the credibility and effectiveness of government.”

She also cited the United Nations Convention against Corruption, which the Philippines ratified in 2006, which regarded corruption as a threat to social stability and security, democratic institutions, rule of law, national economies, foreign investments, sustainable development and international cooperation.

The UN General Assembly, in a 1996 resolution that adopted the International Code of Public Officials, also recognized the seriousness of problems posed by corruption and their threat to the existence of states.

In the case of PDAF, De Lima said corruption threatened national security because money stolen from the rural poor “exponentially drives the incentive for disenchantment in not outright hostility against the government and the States.”

“Those who jeopardize government-spurred economic revitalization through grassroots projects effectively undermine the nation’s economic security, and expose Philippine society to all kinds of civil and political unrest. This is how corruption endangers the nation,” the Secretary said.

Estrada on Thursday protested the DOJ request to cancel his passport, along with other senators accused of plunder.

In an interview with Radyo Inquirer, Estrada said that the DOJ’s decision was “premature” and baseless” because the plunder charge against him has yet to be filed in court.

Francis “Chiz” Escudero also said the request was unjustified because his colleagues were not yet convicted of plunder.

At the DFA,  spokesman assistant secretary Raul Hernandez said they have yet to assess the request from the DOJ.

The DFA however said it has not yet officially received the request but said that it will first assess the request before acting on it.

“We have not received any request from the DoJ yet regarding this issue. But once we receive one, then we will assess the request, and we will proceed from there,” Hernandez told reporters in an ambush interview Thursday at the sidelines of the Management Association of the Philippines (MAP) membership general assembly.

According Article 9 Section 2 of the DFA Department Order 11-97 or the Implementing Rules and Regulations for Republic Act 8239, “Philippines Passport Act,” a passport may be cancelled for three reasons:

a) Upon conviction by the holder of a criminal offense. The passport may be restored after service of sentence.

b) Upon a finding by the Secretary or his duly authorized representative or consular officer that a passport was secured through fraud or misrepresentation, or that it has been tampered with subsequent to its release or issuance to its holder.

c) Upon lawful of the court to hold the departure of an applicant because of a pending criminal case.

Section 4 of RA 8239 also states that: “In the interest of national security, public safety and public health, the Secretary or any of the authorized consular officers may, after due hearing and in their proper discretion, refuse to issue a passport, or restrict its use or withdraw or cancel a passport.”

“Provided, however, That such act shall not mean a loss or doubt on the person’s citizenship: Provided, further, That the issuance of a passport may not be denied if the safety and interest of the Filipino citizen is at stake: Provided, finally, That refusal or cancellation of a passport would not prevent the issuance of a Travel Document to allow for a safe return journey by a Filipino to the Philippines,” it said. With a report from Jerome Aning, Philippine Daily Inquirer

Napoles doesn’t want to testify at the Senate, says lawyer

Read Next
Man abducted in broad daylight in QC
EDITORS' PICK
Metro Manila now at moderate risk for COVID-19 — DOH
Pagasa: Storm Luis to exit PAR by Thursday
Peeking inside the superb night camera features of the vivo V25 series
House energy committee chair Arroyo bats for cheap electricity
POGOs not linked to Illegal online gaming, says Pagcor
Do all the things you do, faster
MOST READ
Remulla lambasts ICC chief prosecutor
Jean Garcia’s son Kotaro catches social media attention for being a V look-alike
Gov’t presses start to roll for 92 million ballots
Maxene Magalona on being asked why she has no kids: ‘It’s awkward, invasive, a bit rude’
Don't miss out on the latest news and information.