Napoles doesn’t want to testify at the Senate, says lawyer 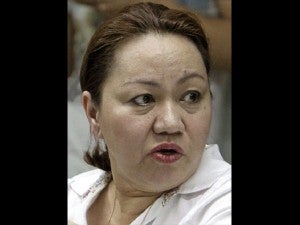 MANILA, Philippines—Janet Lim-Napoles is not inclined to appear and testify at the Senate, her lawyer said on Thursday.

“And I don’t think this is the right time and the right place (for her to give her testimony),” Kapunan said.

Napoles, who has been in jail for serious illegal detention of her cousin and whistle-blower Benhur Luy,  was  subpoenaed by the Senate to appear and testify in the chamber on November 7 in connection with the P10 billion “pork-barrel” scam.

A plunder complaint was also lodged against Napoles at the Office of the Ombudsman, which will file a case at the Sandiganbayan once it finds probable  cause to indict her.

But when asked again why Napoles would not testify in the Senate if she has nothing to hide,   Kapunan said, “Because the Senate is not a court of law. The Senate is [conducting investigation] in aid of legislation…”

As to whether Napoles has something explosive to tell when she testifies at the proper forum, Kapunan said,  “I think this will point to the people, confirm the belief of our people  that the PDAF has been abused, and abused by public officials down to the level of mayor…”