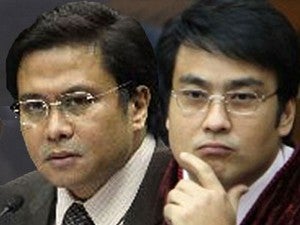 MANILA, Philippines — Senators Jose “Jinggoy” Estrada and Ramon “Bong” Revilla Jr. said they, too, did not steal from the public coffers.

Estrada and Revilla made the remarks after President Benigno Aquino III, in a televised address to the nation Wednesday night, said that he was not a thief.

(I support his statements that he will go after those who take advantage of the public funds. I’m with them,I’m with his government in going after the thieves in government)

(Because even If I were dragged into the PDAF scam, I want to tell you that I have never stolen anything from the
public coffers)

Estrada and Revilla were  among those facing plunder charges for allegedly funneling their  “pork” to bogus non-government organizations identified with detained Janet Lim-Napoles.

But Estrada expressed hopes that the President was not referring to him as one of those muddling the issue on PDAF by allegedly diverting the public’s attention to the alleged anomalous Disbursement Acceleration Program (DAP) of the government.

While he exposed in a privilege speech the additional “pork barrel” funds given to senators who voted to impeach then Chief Justice Renato Corona in 2012, Estrada said he made no mention of the DAP.

Estrada said it was Budget Secretary Florencio Abad,who had claimed that the additional funds given to the senators were coursed through the DAP.

Despite this, Estrada said he still considered the President a friend and ally of his administration.

“Alam mo si Pangulong Aquino kaibigan ko naman yan at until now, I consider mytelf as an ally of this administration. I’m very supportive of all his legislative agenda…” Estrada added.

Like Estrada, Revilla through his lawyer also asserted that he did not steal from the public coffers.

(I’m not a thief and and I did not steal from the public coffers.)

In fact, Revilla said, he was the first to deny any involvement in the PDAF scam and had even called for a thorough investigation of the issue.

And whatever the President says, Revilla said: “The DAP is presidential pork and that is a fact.”

“The President’s explanation on DAP
raised more questions than answers. No senator or congressman knew
about the DAP. It did not pass through Congress. Then too, he did not know that the DAP was used in the impeachment of Chief Justice Renato Corona,” the senator added.