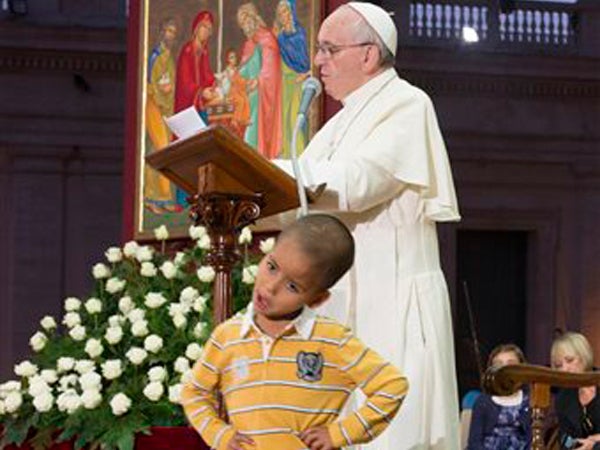 In this Saturday, Oct. 26, 2013 photo provided by the Vatican newspaper L’Osservatore Romano, a young boy, no name available, hugs Pope Francis as he delivers his speech during an audience with families in St. Peter’s Square gathered for the Pontifical Council for the Family’s plenary assembly, at the Vatican. A young boy, part of a group of children sitting around the stage where the pontiff was delivering his message to families, played around Pope Francis as he continued delivering his speech, occasionally patting the boy’s head. AP

VATICAN CITY— Pope Francis was delivering a homily but a little boy stole the show.

Francis was speaking in St. Peter’s Square about the important role grandparents play when a little boy walked up behind him and confidently climbed up and sat down on the pontiff’s white chair. 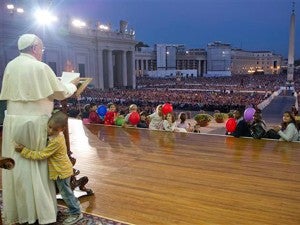 A young boy hugs Pope Francis as he delivers his speech during an audience with families in St. Peter’s Square gathered for the Pontifical Council for the Family’s plenary assembly at the Vatican. AP

The Vatican says Francis was surrounded by elderly faithful and their grandchildren Saturday night at a rally to encourage family life when the boy came up, wearing a striped shirt, jeans and sneakers.

Acting like an indulgent grandpa, Francis let the boy explore the area undisturbed before tens of thousands of people. The pope smiled while reading his speech as the boy sat in the empty chair, gazed up at him and even at one point clung to the pontiff’s legs.