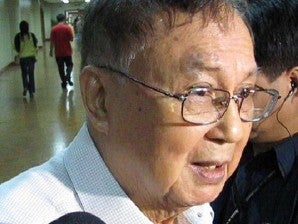 Senator Joker Arroyo on Sunday said state prosecutors should focus on the “masterminds” behind the Maguindanao massacre rather than go after all the 200 suspects, most of whom were simply followers of the Ampatuan clan, and risk prolonging the “trial of the century” for over a hundred years.

In a radio interview, Arroyo said the prosecution should also consider asking Judge Jocelyn Solis-Reyes of the Quezon City Regional Trial Court to concentrate on trying the principal suspects in the killings of 58 people on Nov. 23, 2009, and hold daily hearings to expedite the process.

Tagged as the brains behind the mass murder were former Maguindanao Gov. Andal Ampatuan Sr., his sons Andal Jr.,  a former town mayor, and Zaldy, the former governor of the Autonomous Region in Muslim Mindanao. The three are detained, along with several other relatives.

Arroyo told dzBB that these actions were better than the broad clamor for a live coverage of the trial, which he feared would only prolong the proceedings as the lawyers would then be more conscious of their public image.

“It should just go after the principal defendants so they will be sentenced for their crimes. Every crime has a mastermind, most of those involved were just ‘sabit’ (lackeys). Focus on the big ones; there will be more delays if you mix in the little ones,” he said.

“Most of the defendants were only doing what they were ordered to do. It’s obvious that this case involved a mastermind. It’s a conspiracy, and this was not done by chance.”

Arroyo warned two years ago that prosecuting 200 respondents would inevitably drag the case to 200 years considering that each of them has the right to cross-examine the 100 state witnesses proffered by the prosecution team.

Of the 195 people accused in the massacre, 103 have been arrested and the rest are at large.

The Philippine National Police announced that Bong Andal, the alleged operator of the backhoe used to dig mass graves for the victims, was arrested over the weekend.

“The arrest of Andal and other suspects now in custody manifests the firm resolve of the PNP to arrest and prosecute all suspects behind the mass murder,” PNP Director General Nicanor Bartolome said Sunday.

Based on his experience as a human rights lawyer during the martial law years, Arroyo said that cases involving hundreds of defendants did not get resolved even in the “court-martial setting,” which was a “short cut” of trials in regular courts.

Arroyo concurred with the Supreme Court ruling issued on Oct. 23 barring live coverage of the trial.

“The attention of the lawyers will be divided on the merits of the case itself and how they will look on TV. Lawyers tend to make longer sentences if there is a live coverage. So, let’s balance the advantages and disadvantages. We should have more faith in the judiciary,” he said.

But the Aquino administration is pursuing on-spot reports by radio and TV networks of the trial.

Justice Secretary Leila de Lima said she would meet the prosecutors tomorrow to discuss, among other things, President Aquino’s call for a live media broadcast of the trial.

Malacañang last week said the absence of cameras in the courtroom was giving the impression that the administration was doing nothing for the massacre victims. It said the broadcast would make the people aware of what is going on in the case.

Von al-Haq, spokesperson of the MILF’s Bangsamoro Islamic Armed Forces, said in a phone interview that the group was not providing shelter to Bahnarin “Datu Ban” Ampatuan, one of the primary suspects in the massacre.

“These suspects are native inhabitants of Maguindanao and it so happen that it is an MILF-dominated area, but it would not mean that the suspects are mingling with us,” Al-Haq said. With reports from Gil C. Cabacungan, Marlon Ramos, Christine O. Avendaño and Karlos Manlupig, Inquirer Mindanao