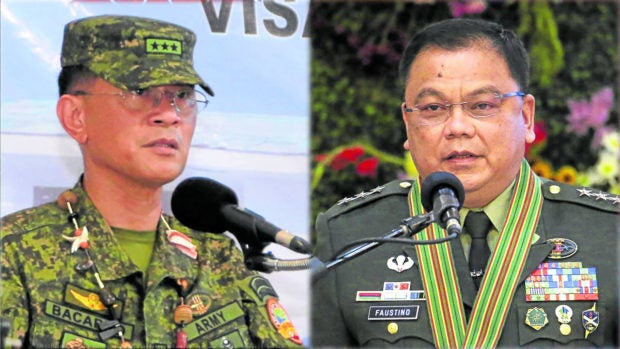 MANILA, Philippines — Some members of the House committee on national defense and security have been going around military field units nationwide this week due to rising anxiety over the new law that sets a fixed term for key officials of the Armed Forces of the Philippines, the Inquirer learned on Wednesday.

The lawmakers, who were joined by officials of the Department of National Defense (DND) and the AFP legal team, have been taking notes on the soldiers’ sentiments in an effort to “fine-tune” Republic Act No. 11709, a law signed in April by former President Rodrigo Duterte and which took effect in July.

Some military officers have found the new law to be a cause of uncertainty with regard to their promotions.

Under RA 11709, military officials appointed to key positions will serve a fixed term of three years, except for the Philippine Military Academy superintendent, who will have a four-year tour of duty.

The law was intended to put an end to the so-called revolving-door policy and “allow the new (military) leadership a longer period to implement reforms, and institutionalize sound policies that will redound to the improvement of AFP.”

“Revolving door’’ was the phrase used to describe the rapid succession of AFP chiefs who had to step down after serving for a short period—sometimes mere months—upon reaching mandatory retirement age.

Among the concerns raised about the new law is the possibility of a significant number of officers facing attrition or reduction in numbers, especially among lieutenant colonels and colonels who occupy important posts, due to reduced “tenure-in-grades” of seven and eight years, respectively. A tenure-in -grade is the maximum length of time that an officer needs to serve before being promoted.

Observers noted that the new law would disregard the AFP’s merit-based system and hierarchy.

Acting Defense Secretary Jose Faustino Jr. acknowledged that there were still some issues that needed to be resolved with RA 11709 and that the DND had discussed with Congress the possibility “for some improvement.”He said the law had resulted in some “unintended consequences” which the department had tried to address with the release of its implementing rules and regulations in September.

“There were provisions that will affect the mid-level officers and enlisted personnel,” Faustino said on Monday.

The Philippine Army headquarters in Taguig City conducted its own consultative meeting in early November to discuss RA 11709, in compliance with the leadership’s directive to get comments from personnel.

“When the new law was passed, perhaps there were some consequences that were not intended that came out recently so we have to do a review. It’s a normal process that laws go through a period of review… but with RA 11709 there’s urgency in the review,” Army chief Lt. Gen. Romeo Brawner Jr. said. “That’s why we have a dialogue with everybody so we can get their sentiments on how to improve the law itself,” he said.

Apprehensions on the new law have been compounded by rumors that AFP chief Lt. Gen. Bartolome Vicente Bacarro, who is just four months into his three-year term, would be replaced and that other officials were already jostling for his position.

“Rumors about a fresh round of ‘rigodon’ in the [AFP] are abuzz. And since the one rumored to be replaced, again, is the incumbent AFP chief, it will trigger a reshuffle in key posts in the AFP,” retired military spokesperson Marine Maj. Gen. Edgard Arevalo said in his column in The Manila Times this week.

Bacarro took the helm of the AFP on Aug. 8, replacing his classmate, Gen. Andres Centino. He is the first AFP chief to have a fixed tenure of three years even though he turned 56, the compulsory retirement age in the military, in September.

“If this rumored impending replacement of Bacarro, who sits barely 90 days or so in office, pushes through, (RA) 11709… will be inutile,” Arevalo said. “And the ongoing nasty jostling of contenders to his post runs counter to the intent of the state to ‘enhance professionalism in the organization’ as enshrined in RA 11709.”

Bacarro did not respond to requests for comment, while Faustino said he did not know “where [Arevalo’s information] came from.”

DND, military in unusual fix due to vacant top-tier posts