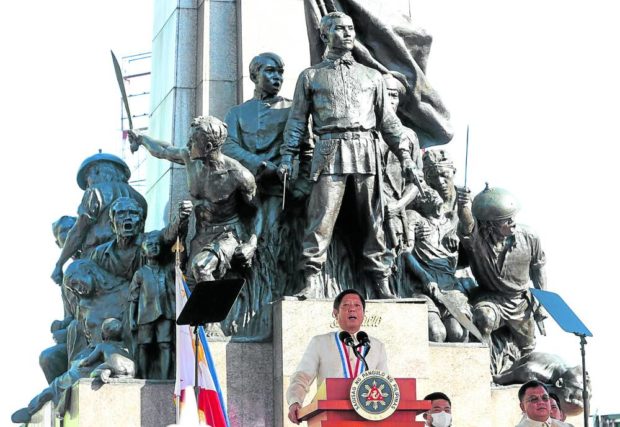 MANILA, Philippines — Congressmen in the bicameral conference committee working on the government’s 2023 budget have been told to restore funds slashed from the National Task Force to End Local Communist Armed Conflict (NTF-Elcac).

Ako Bicol Rep. Elizaldy Co, chair of the appropriations panel of the House of Representatives, said Speaker Martin Romualdez and his nephew, Deputy Senior Majority Leader Ferdinand Alexander Marcos, instructed the House delegation to reinstate the amounts cut from the agency’s budget amid calls for its defunding.

Romualdez and the neophyte congressman issued the instructions even though President Marcos himself, in his Bonifacio Day address, urged Filipinos to become the “best version” of themselves and fight antidemocratic forces that threaten Filipinos’ liberties.

“The shackles that once held our forebears may no longer constrain us, but we must remain vigilant in protecting our country from social ills and other elements that threaten our liberties,” the President said during the commemoration in Caloocan City of the 159th birth anniversary of revolutionary hero Andres Bonifacio.

The President said Filipinos should “cherish the freedoms we hold with even greater fervor,” adding that modern-day Filipinos are challenged to preserve and protect such freedoms.

But lawmakers and civil libertarians have complained that the NTF-Elcac, created by former President Rodrigo Duterte through an executive order, contradicted such lofty aspirations and was employing McCarthyist tactics to trample on people’s rights.

For this year, the NTF-Elcac was given a budget of P17 billion, a little less than the P19 billion it was allocated for 2021.

The budget allowed former NTF-Elcac officials to accuse lawmakers, beauty queens, showbiz personalities, intellectuals and other influencers of being terrorists without any evidence.

Last April, former Sen. Richard Gordon described the task force’s tactics as “imbecilic, stupid and shameful” and pushed for an inquiry into how the agency spent the funds it had received earlier.

For 2023, Co said the originally proposed funding was slashed to P10 billion, but this amount was slashed to P5 billion after the House realigned some of the funds in its version.

Co conceded that the task force has been less than inefficient in handling taxpayers’ monies and urged the agency’s leadership to hasten the implementation of its projects.

“The situation is even worse in 2022. Based on reports received by my office, only 2 percent of NTF-Elcac’s 2022 projects has been completed or ongoing. A whopping 98 percent of the projects are still under the pre-procurement or procurement stage, and it’s already December,” he stressed.

Still, Co said, “We will convince our Senate counterparts in the bicameral conference committee to restore the agency’s proposed budget.”

House Deputy Minority Leader Rep. France Castro, however, objected, saying the amount should not be restored and should instead be realigned for the poor.

“The budget of the NTF-Elcac was already deliberated and debated upon by the plenary, and now they will just set it aside? What’s the purpose of the debate and interpellation? Is there no democracy in Congress? Will the plans of those at the top always prevail?” she asked.

“In 2021 only 48 percent of its projects under the support for Barangay Development Program were completed, and in 2022 only 2 percent were completed,” Castro said.

“If the NTF-Elcac budget is restored, it [will seem] that Congress is rewarding incompetence and Red-tagging, but did not address the real cause of the armed conflict or directly aided our long-suffering people,” Castro said.