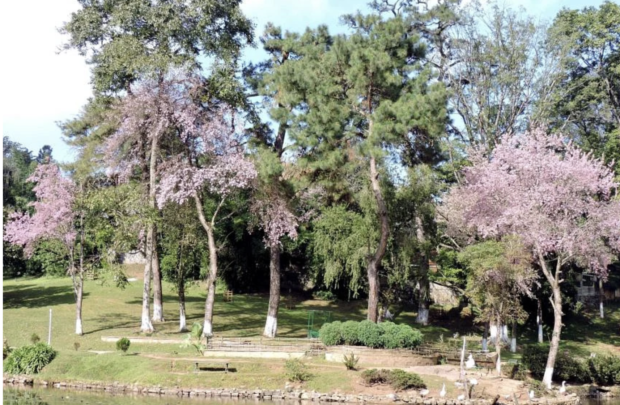 NEW DELHI — Dr Dinabandhu Sahoo was on a trip to talk up the economic potential of seaweeds in India, but that visit also sowed the seed for a similar campaign to drum up support for cherry blossoms.

It was March 2014. Dr Sahoo was in Shillong, capital of the hilly north-eastern Meghalaya state, to deliver a TEDx talk on cultivation and utilization of seaweeds when a tree, with its glossy bark and iconic dainty flowers, caught the marine biologist’s attention from his hotel room.

Dr Sahoo, 60, familiar with the sakura tree from his frequent visits to Japan, knew what he was looking at – it was an unlikely cherry blossom tree in India.

He asked some locals if they had any idea about the tree, but they knew little. Further research told him it was a specimen of prunus cerasoides, a cherry blossom tree endemic to the Himalayan region.

With visuals of crowds enraptured by cherry blossom trees in full bloom in Tokyo playing on his mind, the sakura, he thought, could similarly generate tourism and promote livelihood opportunities in the north-east, one of India’s lesser developed regions.

A seemingly improbable idea germinated in him that day. “I thought if I ever return to the north-east, I would create a cherry blossom festival,” Dr Sahoo told The Straits Times. “I said I will make it happen for India.”

More than eight years on, and with the support of local state governments and many stakeholders who participated in the planting of over 60,000 cherry blossom saplings and continue to support their upkeep, that vision is a blooming reality.

India has two annual successful cherry blossom festivals – one in Shillong and the other in Mao Gate in Manipur (another north-eastern state) – embodying its growing love affair with the sakura.

What was once a tree that locals chopped for wood now enjoys protection from volunteer groups. A tree that locals planted sporadically to demarcate individual plots of land now embellishes vast expanses of roadsides, parks and hillocks.

And the sakura has not disappointed. In their mesmerizing full floral glory at the onset of each winter – usually towards the end of November – these trees draw thousands of visitors, revving up the local economy and bringing in much-needed revenue for locals.

Launched in 2017, the latest edition was held from Nov 22 to 24 with an estimated footfall of around 40,000 visitors who enjoyed a mosaic of cultural performances and food stalls.

Over the years, the crowd-pulling festival has even created a perennial market for vegetables and fruits grown in and around Mao Gate as festival-goers spread the word about their quality.

“We had heard about the cherry blossom’s beauty that many people celebrate in Japan, but we did not realize we had this beauty with us too,” added Mr Kaikho, who now goes around tom-tomming the tree’s value so that more locals realize its potential.

It was a year prior to the festival in Mao Gate that India’s first cherry blossom festival took off in Shillong in 2016. Dr Sahoo, who relocated to the north-east as director of the Imphal-based Institute of Bioresources and Sustainable Development in October 2014, carried out the spadework for both these festivals along with some of his colleagues.

They campaigned with the states’ top political leadership to get them on board and plant the first few trees, which attracted the necessary spotlight. Work followed with the forest department to source more saplings from the wild and plant them strategically at locations such as at Ward’s Lake, a popular tourist attraction in Shillong.

Farmers were encouraged to grow saplings as well to ensure wider availability. This now adds to their income with the saplings being sold to buyers such as village councils interested in beautifying their neighborhood.

“I wanted to create an economy around the tree and tourism is one industry that suits the fragile ecology of the north-east region, where it can create jobs, even if for a short season,” added Dr Sahoo.

True to that vision, the Shillong Cherry Blossom Festival, now managed by Meghalaya’s Tourism Department, has become another drawcard for the city, known for its thriving music culture and scenic locales. The trees’ beauty was even praised by Prime Minister Narendra Modi in one of his monthly public addresses in 2020.

With these trees even planted in the states of Mizoram and Sikkim, also in the north-east, Dr Sahoo now plans to replicate the sakura’s success in other cold regions of the country that offer ideal growing conditions, such as the Himalayan state of Uttarakhand in the north.

Eventually, he hopes more and more Indians, especially those who cannot afford to fly abroad, will be able to admire the sakura’s beauty. “For me, the cherry blossom is a symbol of peace and tranquillity,” Dr Sahoo said. “It brings a smile to my face; every flower does not give you that feeling.”

S. Korean lake famous for cherry blossoms viewing to be shut down until mid-April to prevent COVID-19 infection